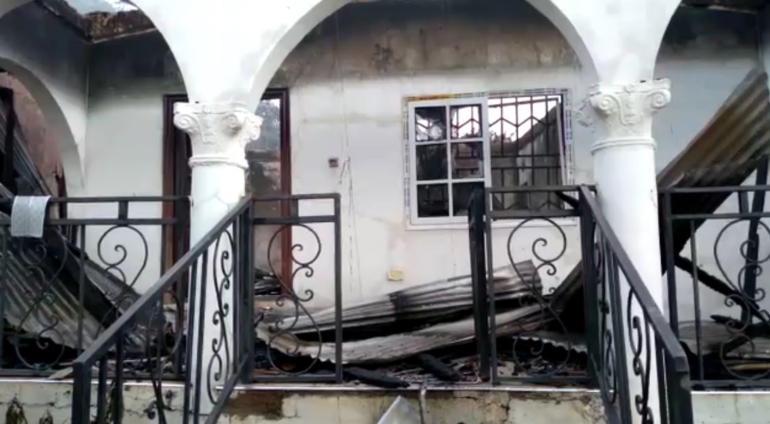 Fire has destroyed a 4-bedroom flat at Adansi Asokwa in the Ashanti Region destroying the edifice of the building completely.

According to the landlord, Osei Richard who was saddened by the development, he could not explain how it began.

Speaking to Adom News’ Isaac K. Normanyo, the landlord was, however, grateful that his family was safe despite the inferno.

“I have lost everything but I thank God since my family and I are still alive.

I don’t even know how to explain what has happened because it happened at once, I came to meet it,” he said.

A tenant, Akosah Sarfo Harrison lamented; “I have lost everything, my passport, money, TV, fridge, certificate etc, all that is left is myself.”

“I was training at the back of the house when I saw smoke coming out from the rooftop so I called my landlord who quickly I called the children out of the room, then we saw the fire blazing out,” he narrated.

“I am worried because as a young man with nothing, trying to start all over is a big bother.”

According to Mr Harrison, the Fire Service in Fomena upon arrival encountered difficulty in getting closer to the scene due to the conjunction of the buildings.

He, further, commended the fire service for their effort in quenching the fire.

“The fire service has done well because the way the houses are built here, made it difficult for them to get closer but they tried to quench it for us.”

The Fomena fire Commander D.O.III Oscar Opoku who led the team of firemen to the scene said electrical fault might be responsible for the fire outbreak.

He charged Municipal and District assemblies to make an allocation for streets when giving out plots to developers.

The building estimated to be worth GHS2 billion contains a kitchen, two toilets and a bathroom.

DISCLAIMER: The Views, Comments, Opinions, Contributions and Statements made by Readers and Contributors on this platform do not necessarily represent the views or policy of Multimedia Group Limited.
Tags:
Ashanti Region
Fire Outbreak
Fomena
Four bedroom burnt