North Korean state media have hailed US President Donald Trump’s impromptu visit to the country as “an amazing event”.

Mr Trump had earlier tweeted asking Mr Kim if he would like to meet while the US president was in South Korea.

On Monday, KCNA carried extensive coverage of the unprecedented meeting.

North Koreans rarely receive news of the outside world, and the heavily controlled media has depicted the US as its most hated enemy for decades.

Images of the US president walking into the North as a friend of Mr Kim will be an extraordinary sight for ordinary North Koreans.

Negotiations over North Korea’s controversial nuclear programme have stalled since the second summit between the two leaders ended without an agreement in February.

After their surprise talks on Sunday, they reaffirmed their claims to friendship and said talks would continue through their negotiating teams.

Critics have dismissed the occasion as an act of political theatre which does not make substantial progress towards North Korea giving up its nuclear weapons.

What happened at the DMZ?

He was scheduled to hold talks about the stalled North Korea nuclear negotiations with South Korea’s President Moon Jae-in and to visit the demilitarised zone (DMZ), the buffer area between the two Koreas since the end of the Korean War.

On Saturday, he tweeted a message to Mr Kim, suggesting he could “meet him at the Border/DMZ just to shake his hand and say Hello(?)!”

After a day of speculation and backroom diplomacy, Mr Trump and Mr Moon confirmed on Sunday that Mr Kim had accepted the invitation and there would be a “brief handshake”.

They arrived at the DMZ shortly after, and following a brief tour, they and Mr Kim approached the military demarcation line.

“Good to see you again. I never expected to meet you at this place,” a smiley Mr Kim told Mr Trump through an interpreter in an encounter broadcast live on international television.

Looking relaxed, Mr Kim then crossed into South Korea alongside Mr Trump and said: “I believe this is an expression of his willingness to eliminate all the unfortunate past and open a new future.”

What agreements did they reach?

The encounter had initially been billed as a short greeting but Mr Trump and Mr Kim ended up talking for almost an hour in a building known as the Freedom House, on the South Korean side of Panmunjom, the “truce village” inside the DMZ.

Mr Trump and Mr Kim agreed that negotiators would meet in the next weeks to resume discussions about North Korea’s nuclear programme. Mr Trump told reporters he was “not looking for speed [but] looking to get it right”.

He said sanctions on North Korea would remain in place, but appeared to leave open the possibility of easing them as part of the talks. Mr Trump also said he had invited Mr Kim to visit Washington.

What have North Koreans heard about the visit?

In unusually quick reporting, KCNA called the last-minute meeting an “amazing event”, noting that the leaders had exchanged “historic handshakes at Panmunjom, a place that had been known as the symbol of division”.

It quoted Mr Kim as saying it was his “good personal relations with President Trump that made such a dramatic meeting possible at just a day’s notice”.

They would “continue to produce good results unpredictable by others and work as a mysterious force overcoming manifold difficulties and obstacles in the future,” it said.

Confirming comments from Mr Trump, KCNA said the leaders had agreed to “keep in close touch in the future” and to “resume and push forward productive dialogues for making a new breakthrough in the denuclearization of the Korean peninsula and in the bilateral relations”.

‘Trump’s made for TV moment’ – how US media reacted

President Trump scored a political win “despite long odds of diplomatic success,” CNN reports. The news website says his “singular televised moment will bolster his claims to be a statesman and a peacemaker”.

CNN suggests the US president’s “different approach is worth a try even if there is no indication yet that Kim is sincere about handing over weapons which are the ultimate guarantee of his regime’s capacity to stay in power”.

Both the Washington Post and Politico highlighted the president’s background “groomed in reality TV and the flashy New York real estate world” which helped him to orchestrate “the made-for-TV moment he desired”. 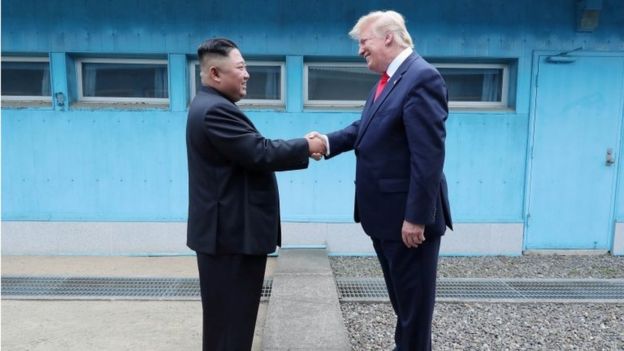 The Post calls it a “personal milestone” for the president, likening Mr Trump to “a seasoned television producer” in building up the suspense in the run up to the meeting “in classic Trumpian fashion”.

Donald Trump is “the only US president who has been willing to take the risks necessary to try to lure North Korea out of darkness and away from its nuclear ambitions,” an op ed for conservative Fox News argues.

With the clock running and a presidential election looming, author Richard Manning says Mr Trump “doesn’t have time to wait on the world’s conventions to get the job done and leave both America and the world in a better place than he found it”.

The New York Times, meanwhile, concludes that the US may just settle for a nuclear freeze from North Korea. The paper says this might provide Mr Trump “with a retort to campaign-season critics who say the North Korean dictator has been playing the American president brilliantly by giving him the visuals he craves while holding back on real concessions”.

How are US-North Korea relations?

Negotiations with North Korea to try to convince it to abandon its controversial nuclear programme reached a peak last year when Mr Trump and Mr Kim had a historic meeting in Singapore.

They both committed to the “complete denuclearisation” of the Korean peninsula, but without clarifying what that meant. 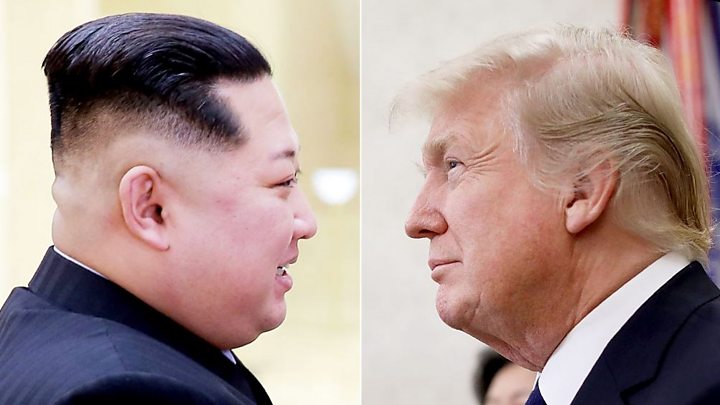 Donald Trump and Kim Jong-un: From enemies to frenemies

It was hoped their second meeting, in Hanoi in February, would make some concrete agreement about North Korea handing over its nuclear programme in exchange for some of the tight sanctions against it being lifted.

But those talks ended with no deal, as they failed to agree on the pace at which sanctions should be eased.