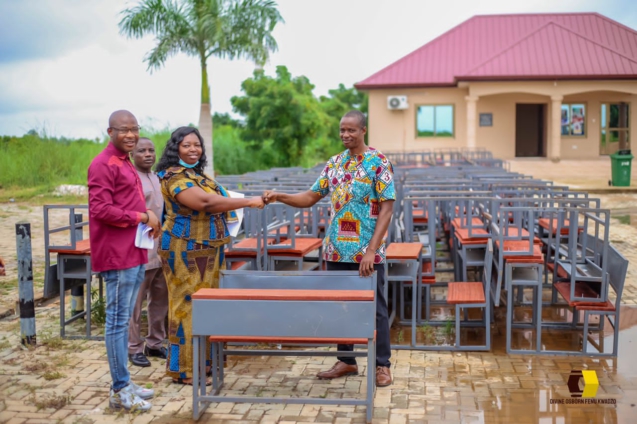 Presenting the desks to the District Education Directorate, Mr Fenu noted that the assembly have selected some schools that urgently needed the desks from the 6 traditional areas adding that other schools will soon take delivery of theirs.

He reiterated government’s commitment to making sure that education is prioritised especially in the rural communities so as to give children a firm foundation.

“Government and the assembly will continue to support education throughout the district,” Mr Osborne Divine  Fenu said.

Mr Fenu pledged his preparedness to support every activity that would promote education in the district.

He urged heads of the various schools to take good care of the desks so they can last for a longer period of years.

District Education Director, Madam Isabella Ayimey was grateful for the kind gesture by government and the DCE  and pledged to make sure that the desks are taken care of in order to prolong their life span

She however pleaded with government through the DCE to get a lot more desks for the other schools that are in dire need of them.

Headteacher of Dadome D.A Basic  Primary School, Mr Glover on behalf of his colleague headteachers thanked the DCE for the facility.