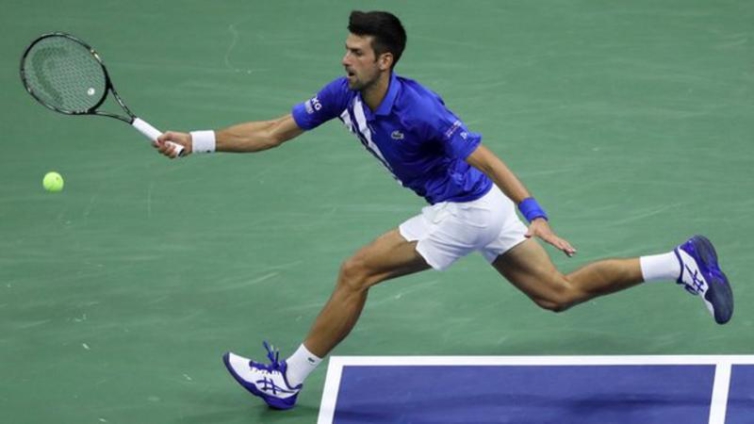 Novak Djokovic has won the US Open on three occasions

World number one Novak Djokovic moved comfortably into the US Open fourth round, beating Jan-Lennard Struff in straight sets.

Djokovic, seeking his 18th Grand Slam title, remains unbeaten in 2020 and has now extended his winning streak to 26.

But Greek fourth seed Stefanos Tsitsipas is out after blowing six match points against Borna Coric.

The 27th seed, who triumphed after four hours and 36 minutes, will face Australian Jordan Thompson on Sunday as he seeks to reach his first Grand Slam quarter-final.

Thompson, 26, reached the fourth round of a major for the first time by beating Kazakhstan’s Mikhail Kukushkin 7-5 6-4 6-1.

Djokovic will play Spanish 20th seed Pablo Carreno Busta in the fourth round in New York.

“It was a very good performance for my side and I managed to read his serve well,” said Djokovic.

“The second and third sets was really a great feeling on the court.”

Djokovic, who beat Britain’s Kyle Edmund in four sets in the second round, had easily defeated Struff for the loss of just four games at last week’s Western and Southern Open, which was also played at Flushing Meadows.

Struff was more competitive here for the first two sets but ultimately had no answer to Djokovic’s relentless power and accuracy, with the Serb breaking to love in the fourth game of the third set before hurrying to the finish.

DISCLAIMER: The Views, Comments, Opinions, Contributions and Statements made by Readers and Contributors on this platform do not necessarily represent the views or policy of Multimedia Group Limited.
Tags:
Jan-Lennard Struff
Novak Djokovic
US Open
US Open 2020