NPP intensifies campaign in constituencies where members have gone independent 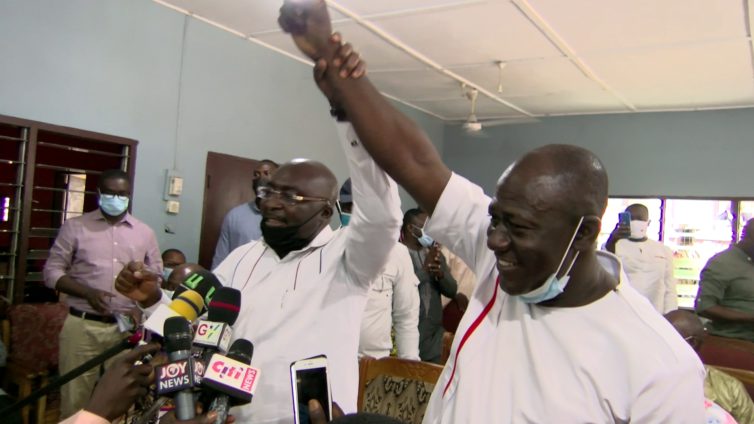 The governing New Patriotic Party (NPP) has intensified its campaign in areas where some party members have decided to run as independent parliamentary candidates in the upcoming elections.

The first day of Vice President, Dr. Mahmud Bawumiah’s tour to the Ashanti Region focused on Fomena and Bekwai Constituencies, where some independent candidates are gaining roots.

In the Bekwai constituency, Akwasi Amofa Agyemang has decided to contest as an independent candidate following NPP executives decision to let the incumbent MP who is also the Deputy Speaker of Parliament, Joseph Osei Owusu represent the party as unopposed.

Due to this, the party’s Ashanti Regional Chairman Bernard Antwi Boasiako, popularly known as Chairman Wontumi has described it as ‘unfortunate’, since he is championing an agenda to win all seats in the region for the party.

According to Chairman Wontumi, he has contacted Mr Agyemang on several occasions to rescind his decision but it has all been futile.

“I brought the former IGP, Patrick Acheampong to speak to him to rescind his decision but he refused. I have called on pastors, chiefs, and other dignitaries to engage him but he has been headstrong.

“I have made the President call him but he did not honour his invitation,” he revealed.

Interestingly, the incumbent Bekwai MP, was first voted into Parliament as an independent candidate.

At Fomena, the incumbent MP, Andrew Owusu-Amankwah is contesting the seat as independent after failure to contest the primaries due to what he described as unfair treatments by some constituency party executives.

At a durbar to receive the Vice President, traditional authorities of the area expressed their displeasure with the candidature of Mr Amankwah Esiama.

“We wanted him to reconsider his decision to contest as independent but we learned he has already filed his nomination and we are not happy with that,” the linguist, Nana Kwasi Anawuo II told Dr Bawumia.

He then said, “This is our parliamentary candidate for the constituency, we don’t support the independent candidate. I know him [Philip Ofori Asante] personally as a banker when I worked with the Bank of Ghana, he is a credible candidate.”