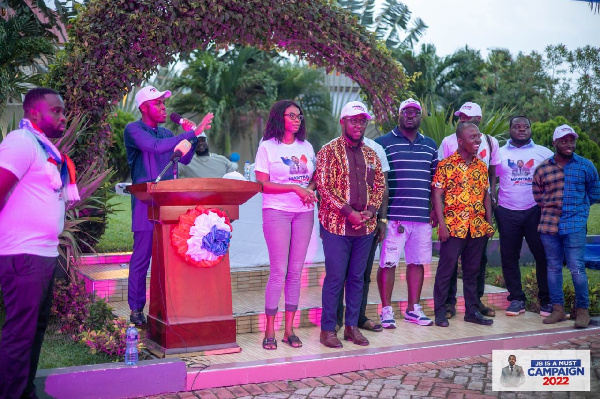 A youth group affiliated to the governing New Patriotic Party, ‘JB IS A MUST’, has declared its support for the incumbent General Secretary of the party, John Boadu for the upcoming National Executives Committee election.

The group has set out to promote the good works and policies of John Boadu with a firm belief that his victory will be a significant boost in the NPP’s bid to ‘break the 8’.

In furtherance of this objective, the group on Wednesday, June 8, 2022 unveiled ambassadors to lead the campaign to have John Boadu retained.

The ambassadors will propagate and sensitize NPP delegates on the need to maintain John Boadu as General Secretary for the NPP in anticipation of retaining the party in power.

According to the group, the only way to achieve the party’s ambition of breaking the eight in the 2024 elections is to have experienced party executives onboard going into the election.

Addressing the press at the unveiling event, founder of the group, Benjamin Gyawu Appiah implored on delegates of the party to retain John Boadu as its General Secretary.

“The retention of John Boadu is important for the party. We are here for John Boadu and we believe in him. Our duty as ambassadors will be to sell his good message to the party and to the people of Ghana. We are convinced that with John Boadu in charge, we will break the eight,” he said.

John Boadu on June 1, 2022, launched his campaign to contest the General Secretary of the NPP. His campaign will run on the theme; “Making history together.”

Addressing dignitaries and party officials at the launch, John Boadu urged them to rally behind him and buy into his plans.

He expressed strong desire to lead the party and help it win the 2024 elections.

“If we have to win the 2024 election and break the eight, we need experience and hard work, and this is what I offer,” he said.