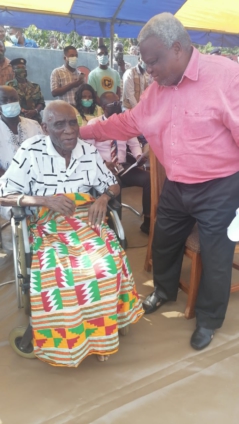 1972 boxing bronze medalist, Prince Amartey, passed on during the weekend after a long battle with illness in the Volta regional capital, Ho, where he has been based for years.

Amartey, aged 78, made Ghana proud by winning a bronze medal at the Munich Games in the middleweight (75kg) category. Amartey shared the podium with American Marvin Johnson who later became a three-time light heavyweight champion. This feat came after he had previously competed in the 1968 edition of the games.

He also shared the space with Eddy Blay (deceased) and Clement Ike Quartey and recently Samuel Takyi who was the nation’s sole medalist at the Tokyo Games.

Only a year ago in the Volta Regional Capital of Ho, the Ghana Armed Forces extended a modest gesture of a grocery shop to sustain the ailing legend who could only move around by a wheelchair. Mr Amartey for years had economic struggles which pushed him to settle for menial jobs including sweeping markets.

The Mini Mart, situated within the ‘66’ Artillery Regiment of the Volta Barracks in Ho, was strategically positioned to cater for the everyday needs of the boxing legend according to the leadership of the Ghana Armed Forces.

Amartey, who was previously an army officer, had an early exit from the Ghana Armed Forces as a Corporal in 1974.

He previously competed in the light middleweight division at the summer Olympics in 1968. He also competed for Ghana at the 1970 edition of the Commonwealth Games and World Armed Forces Games in Rotterdam in 1971.

Prince Amartey left behind a daughter Vivian Amarkie Amartey and grandchildren. He lost his only son Evans Yao Otoo some years ago. Meanwhile, his family is yet to convene on funeral arrangements.

DISCLAIMER: The Views, Comments, Opinions, Contributions and Statements made by Readers and Contributors on this platform do not necessarily represent the views or policy of Multimedia Group Limited.
Tags:
Olympic games
Prince Amartet