t was 30 minutes after midnight on January 1st, 2019. We had just rung in the New Year, but we were about to do another countdown — the one we had all been waiting for.

I was packed in tight among a massive crowd of engineers, scientists, and general space enthusiasts. Many were sporting cocktail dresses and suits for the occasion, while others wore shirts and jackets adorned with NASA’s logo. Up on a stage at the front of the room was Alan Stern. He was surrounded by dozens of little kids, many of whom were also wearing NASA-branded clothing. One little girl was even dressed in an orange space suit. 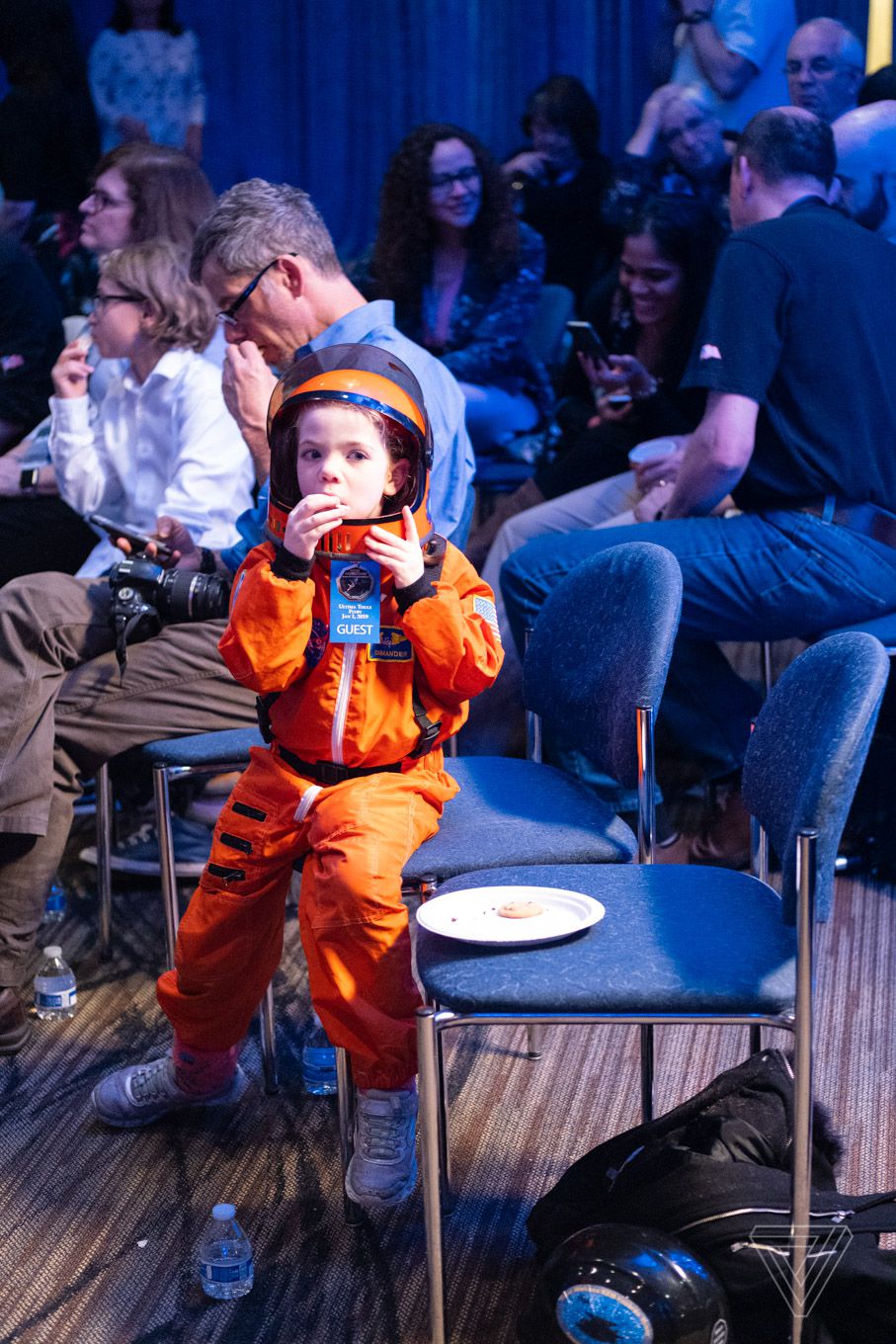 The clock read 12:32AM ET. In just one minute, a spacecraft named New Horizons would pass by a rock the size of New York City, located about 4.1 billion miles away from the revelry in Times Square, in the outer reaches of the Solar System.

“At this very moment, while we’re speaking and celebrating this event, New Horizons is taking its riskiest observation,” Stern said into a microphone, hyping up the crowd. The room was buzzing with excitement, and groups of people periodically burst into cheers. Many waved tiny American flags in the air.

Soon, the countdown began. “Five... four... three... two... one! Go, New Horizons!” The sounds of fake fireworks filled the room, while the children onstage threw confetti into the air. Those in the crowd cheered and smiled. Hugs and handshakes abounded. It was midnight all over again — except this time, there was even more electricity. 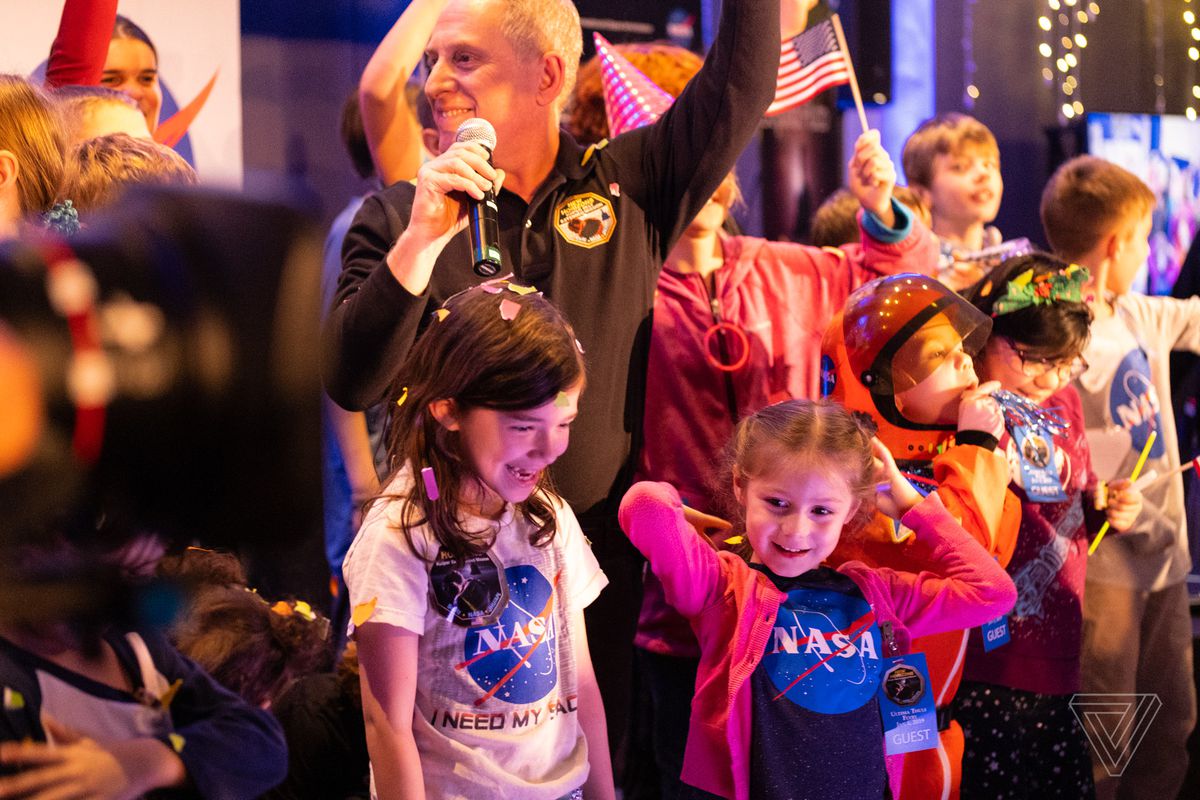 As exciting as the moment was, it was entirely premature. None of us actually knew if the spacecraft had passed by this rock or not. There aren’t reality TV camera crews in the outer Solar System live-streaming the antics of robotic space explorers. And even if there were, all of that content would run on a massive delay. New Horizons is so far out in the Solar System right now that it takes six hours for one radio signal to reach us here on Earth. That means we can never know what New Horizons is doing in real time.

So we had all just celebrated something we hoped had just happened.

But the team that operates New Horizons — many were in the room with me — had been preparing for this moment for years, and they wanted a party to mark the occasion. The commands to the spacecraft were carefully crafted and beamed to the vehicle long ago. All the spacecraft had to do was perform as it was told.

Fortunately, New Horizons has been through all of this before. Three and a half years earlier, the spacecraft zoomed by the dwarf planet Pluto, snapping the first close-up images of the tiny world. That event was a major success that captured the nation’s attention. But once that flyby ended, New Horizons kept on zooming through the Solar System in order to meet up with another rock — an object designated 2014 MU69.

This object has been something of a mystery. We didn’t even know that it existed until four years ago. Scientists were able to spot it in 2014 using NASA’s Hubble Space Telescope, which is in orbit around Earth. But tracking it has been a challenge. About 100 times smaller than Pluto, MU69 is tiny and far out, making it super hard to see. Up until the flyby, the only images we had of the object were little specs of light or blobs that were just a few pixels across. No one on the team really knew what to expect.

THIS OBJECT HAS BEEN SOMETHING OF A MYSTERY

But New Horizons was about to get an up-close view, revealing for the first time what this kind of object looks like. This weird rock is located in an area of the Solar System known as the Kuiper Belt, and it’s unlike anything we’ve ever studied up close before. It’s so small and so distant from the Sun that it’s remained relatively unchanged since the beginning of the Solar System. Scientists think that in the early days of our Solar System, many small objects like MU69 ultimately came together to form planets and moons.

MU69 was perfectly positioned so that New Horizons could whiz past the object on its journey beyond Pluto. Since the whole flyby process was automated, it meant fans, team members, and reporters could gather together in Laurel, Maryland, for the historic occasion. There’s a missions operations center there, at the Applied Physics Laboratory of Johns Hopkins University, where the team can monitor incoming and outgoing spacecraft signals. Since the flyby happened in the early hours of New Year’s Day, 2019, it also meant that the crew was ready to party in style. 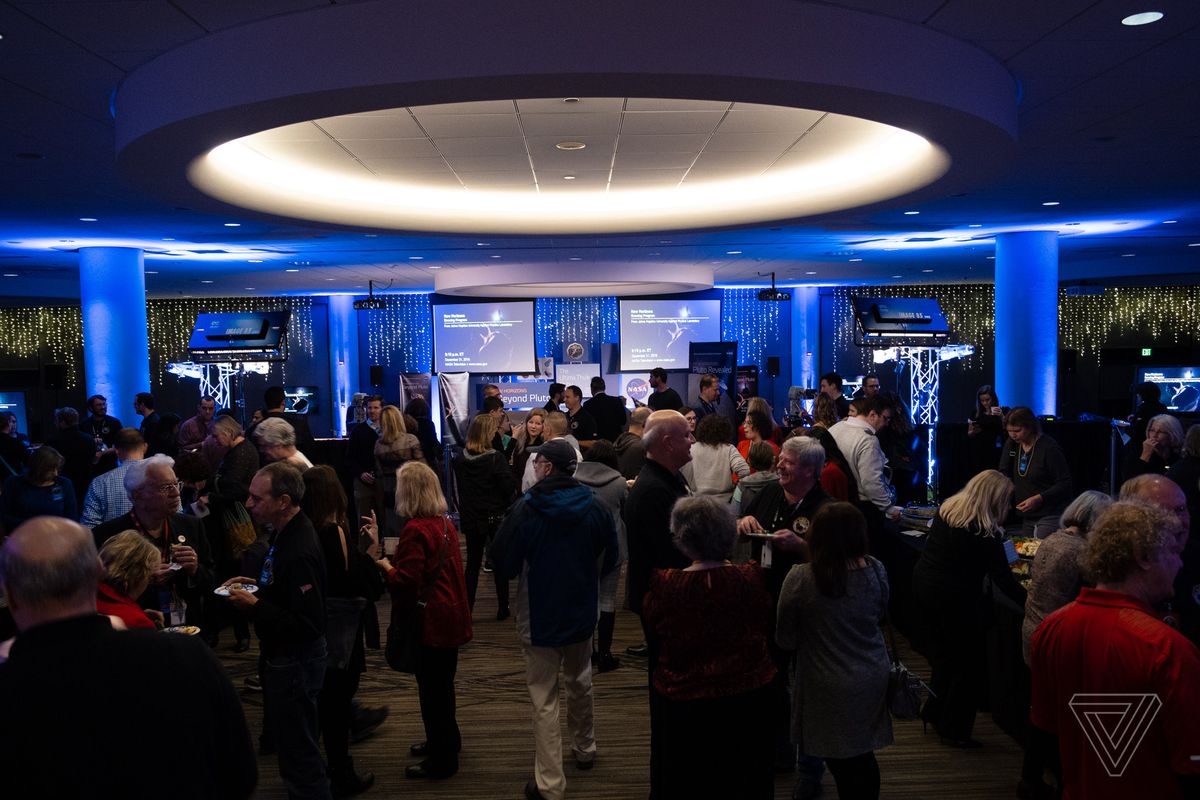 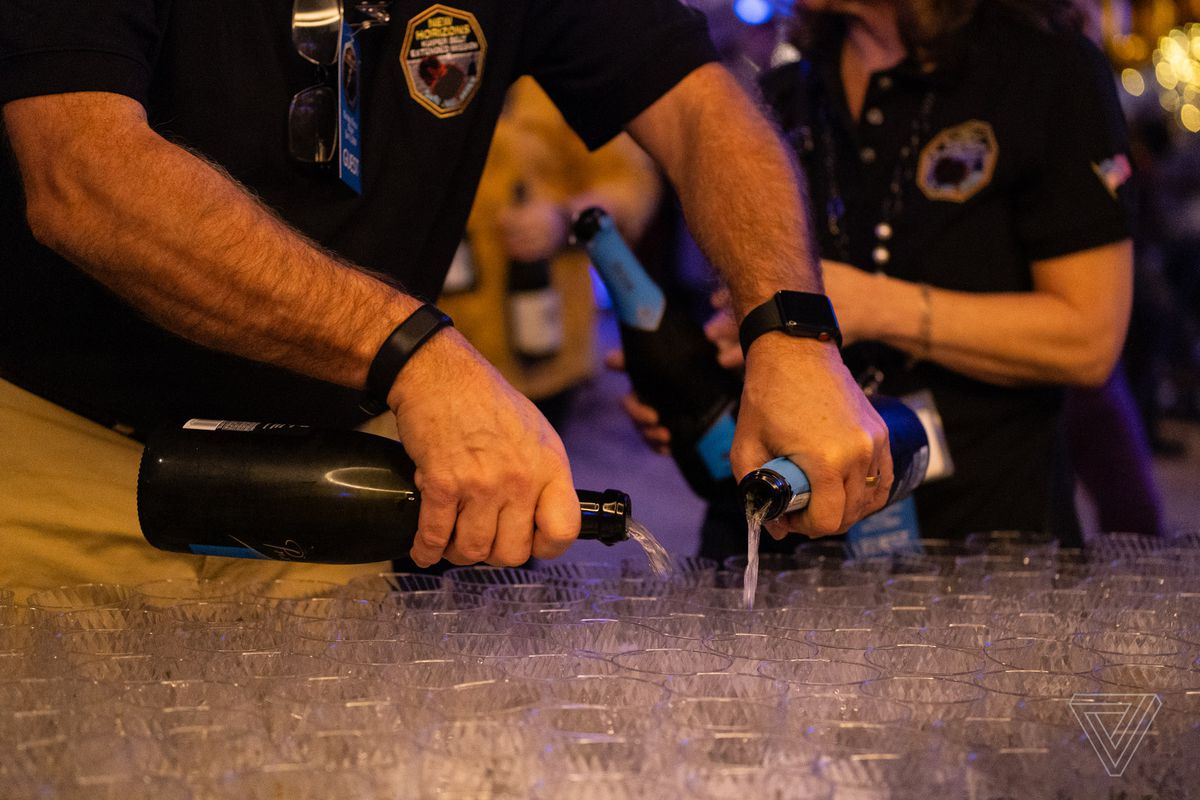 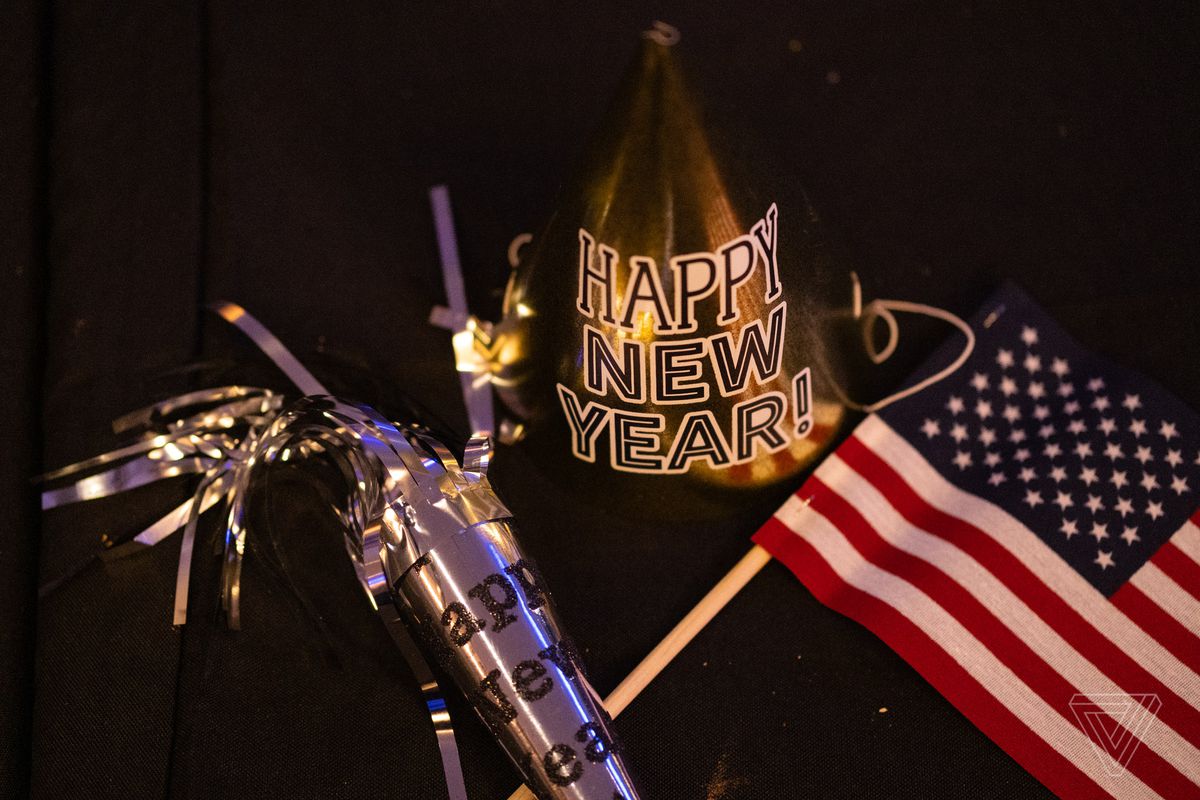 In keeping with the night’s theme, a huge hall was outfitted with twinkle lights and balloons. New Year’s Eve party hats were available for guests, along with streamers. People could take their picture in front of displays with the New Horizons mission logo. There were huge white posters that guests could sign to give their best wishes to the spacecraft.

This party was extra packed, too. Johns Hopkins allowed members of the media and missions scientists to bring guests with them. It was New Year’s Eve, after all — a time to spend with loved ones. Toddlers sprinted through the space, while children trailed their parents, some of whom were more interested in their smartphones than the festivities. I dragged along my fiancé and tasked him with taking pictures for this article. 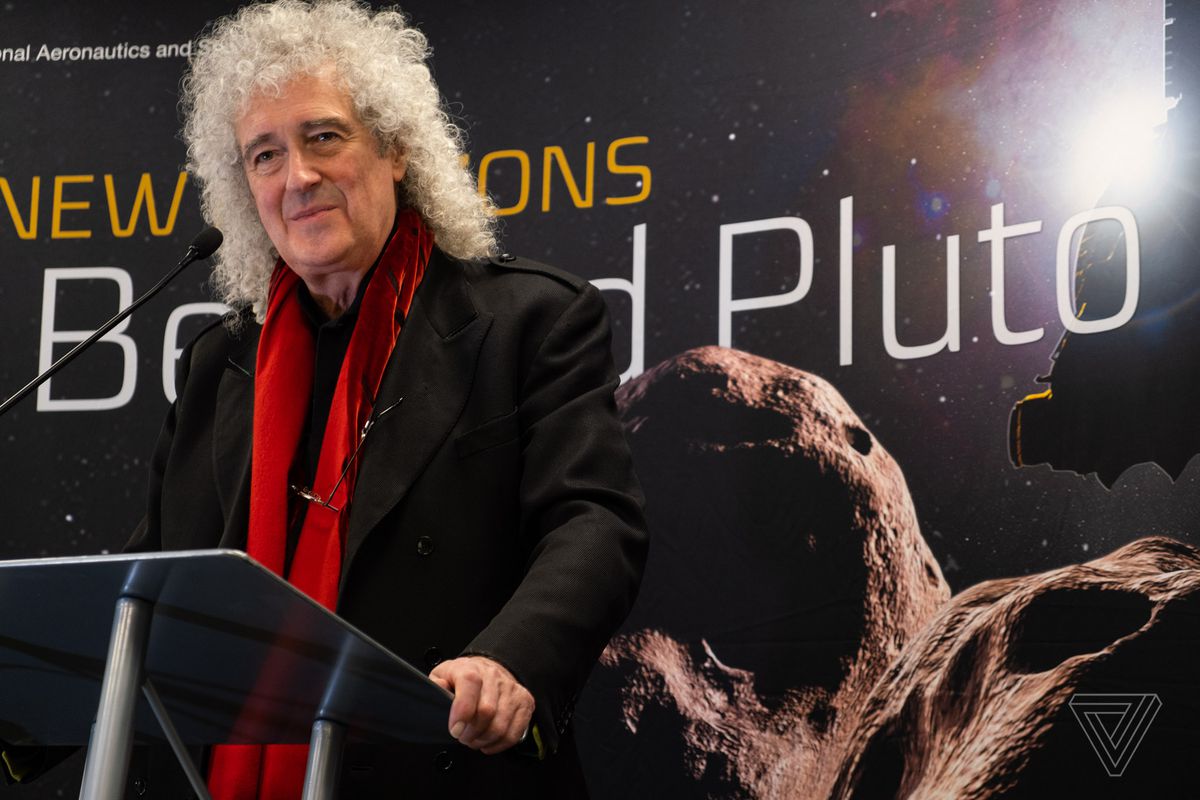 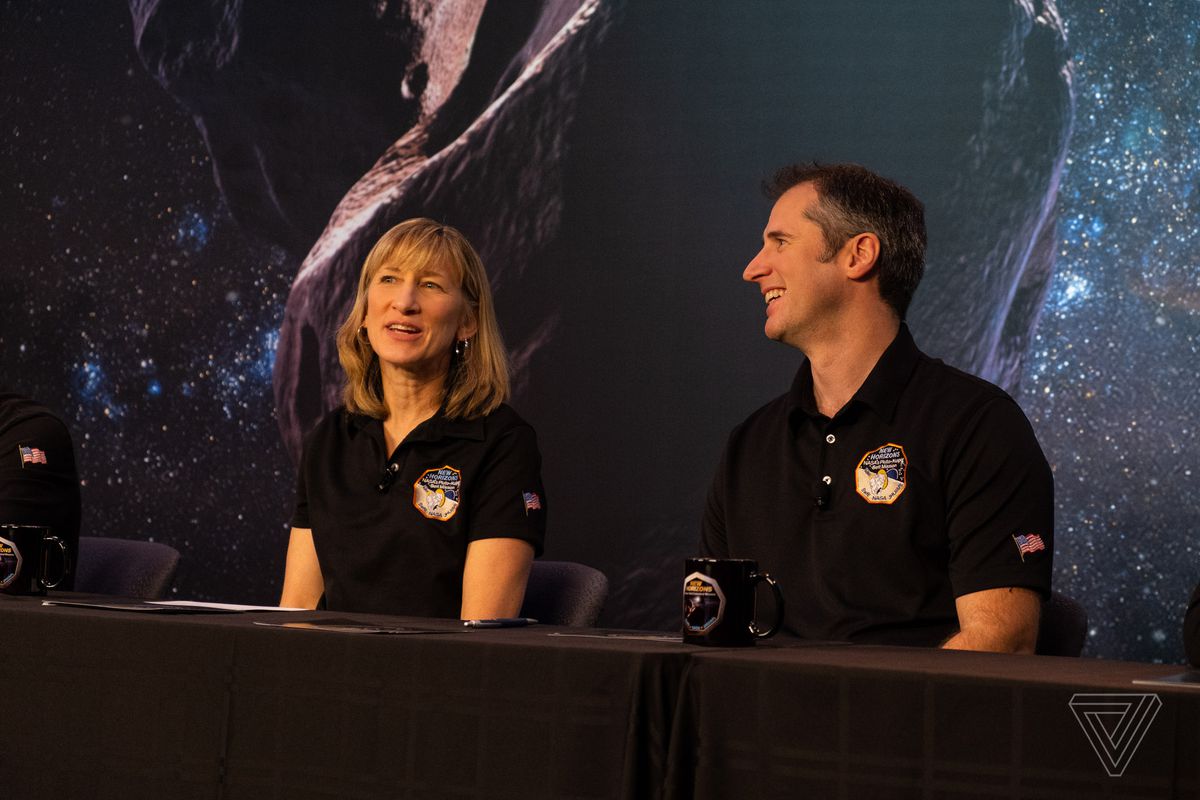 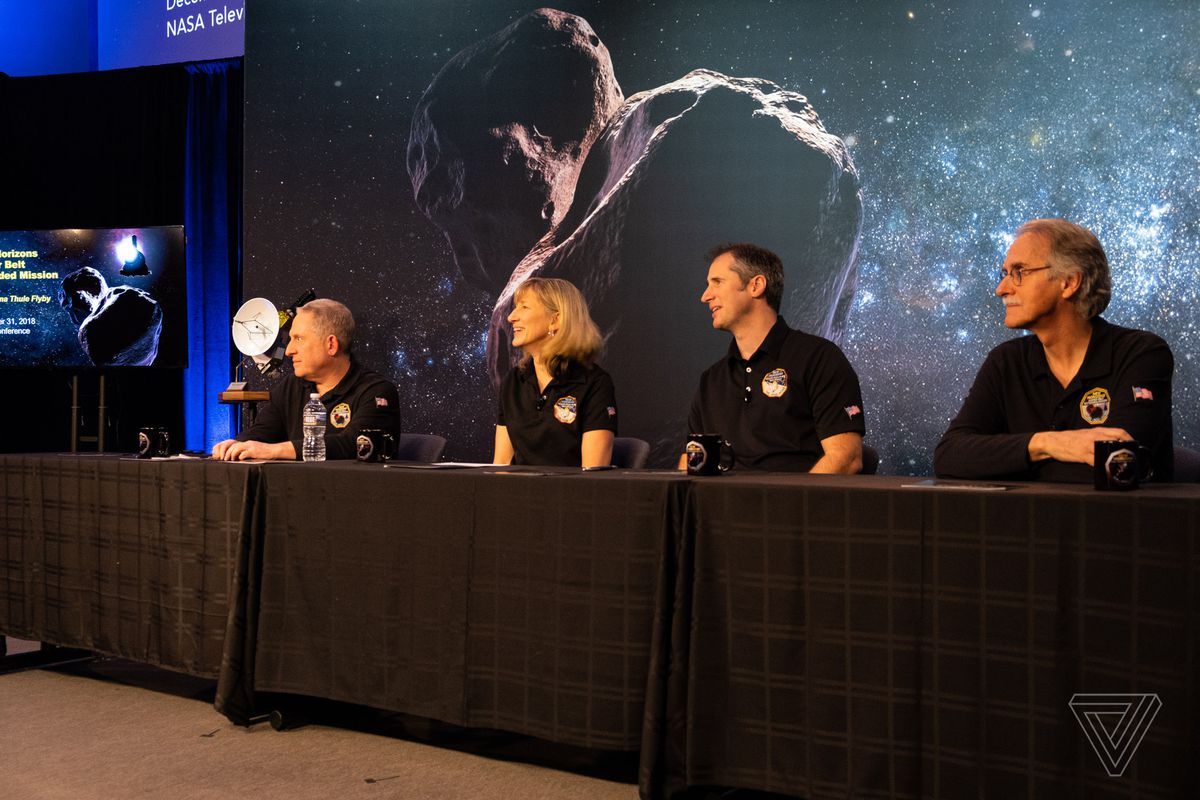 Leading up to midnight, scientists with New Horizons hosted panels, describing the science they hoped to achieve with the spacecraft and how we study the outer Solar System. All the while, the room grew more crowded as people became more animated and chatty. There were also a few VIPs in attendance — notably, Queen guitarist Brian May, who is also an acclaimed astrophysicist. Word was that he planned to debut a song after midnight, dedicated to the New Horizons mission. “My song, my track, my anthem became about the human spirit, endeavoring to discover the Universe,” May told us earlier in the day.

“IT’S BEEN SOMETHING I’VE BEEN WORKING ON FOR A BETTER PART OF A DECADE NOW.”

I made it a point to talk with some of the New Horizons team members I had interviewed before. I asked one, Alex Parker, how he was feeling now that we were finally going to see this thing. He was instrumental in finding MU69 in the first place, and I couldn’t imagine what it must feel like to finally see something up close that you had helped discover. “At this point, it still doesn’t totally feel real,” Parker said. “It’s been something I’ve been working on for a better part of a decade now.” He added: “I’m not totally braced for it.”

Soon, midnight arrived. Plastic cups with champagne were doled out to guests. After we celebrated the New Year, everyone tried to hush as May introduced his song to the pumped-up crowd. The hall was instantly filled with electric guitar riffs, banging drums, and May’s voice bellowing lyrics like “New Horizons to explore / New Horizons no one’s ever seen before.” A projector near the ceiling displayed an animated music video, complete with images of the spacecraft whirling through space. It was impossible not to giggle at the scene. A spacecraft, rocking and rolling.

Once the flyby countdown ended, the magic of the night faded quickly, and we escaped as fast as we could — sleep was now my highest priority. We had to be back in the auditorium in just a few hours to confirm that this spacecraft had indeed survived. After the flyby, New Horizons was going to send a signal back to Earth to let the team know it was in good health. That signal was scheduled to arrive at 10:30AM ET on January 1st. We sped to our hotel, and I fell asleep as soon I hit the pillow.

What seemed like a second later, we were back at Johns Hopkins. The same crowd was there, drastically more subdued. I caught quite a few yawns and watched as people gathered around the free coffee dispensers.

We all filed into a nearby auditorium and took our seats. From there, we watched a giant screen, displaying people watching... screens. It was a live look at the missions operations center, where the mangers of the mission monitored the data from New Horizons as it came in. Compared to the excitement of yesterday, the auditorium felt like a tomb. People spoke in hushed tones, but most stayed silent. Everyone was eager to know what the data revealed. The room felt dense as the unspoken pressure weighed down on everyone. My stomach suddenly lurched.

“WE HAVE A HEALTHY SPACECRAFT.”

But then Alice Bowman, the missions operations manager for New Horizons, started smiling on the screen, and the auditorium broke into nervous laughter. Was good news coming? Quickly, she started to list off the status of each of New Horizons’ subsystems.

“Thermal is reporting green status,” she said, as the auditorium broke into wild applause. She did that for each of the systems, including the vehicle’s propulsion, power, computer storage, and more. Once she went through the checklist, she stood up and declared to the room:

“We have a healthy spacecraft,” she said. “We’ve just accomplished the most distant flyby.” 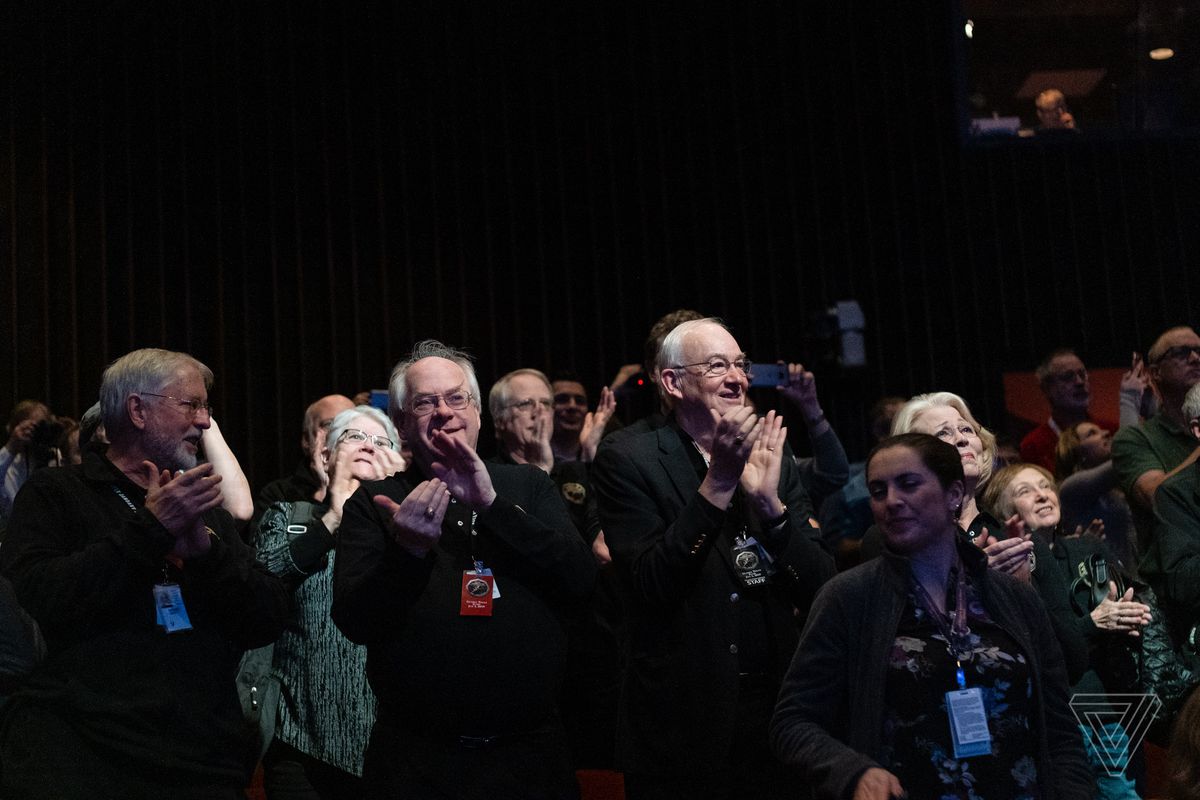 The crowd in the auditorium erupted. There was no countdown for this celebration, and the room was filled with half-asleep people, but the cheers and applause overwhelmed the commotion from the night before.

There remains a lot to learn about MU69. Getting all of the juicy details from the flyby will require a lot of waiting. New Horizons takes a long time to send back its data, so we didn’t even get the first close-up image until the day after the flyby. (And now we know that this object looks something like a lumpy snowman.) In fact, it’s going to take 20 months for all of that information to come down to Earth. That means there’s still lots counting down left to do, but at least we know that our premature celebration wasn’t in vain.