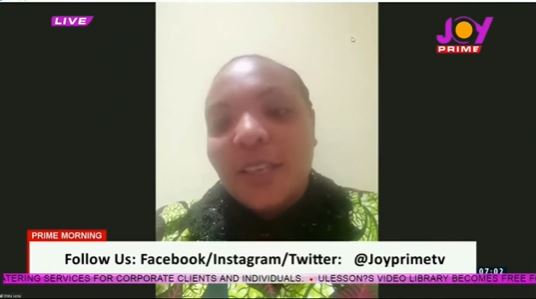 The mother of the nine-year-old boy who wrote a letter requesting that his mother allows him to take his iPad to school for the ‘Our Day’ celebration today has agreed to honour her son’s wish.

Oswald had pleaded that Rita Lena Gennuh includes his iPad, adding, “Note, Mrs Appiah said that I can bring my iPad, please don’t disappoint me.”

Speaking to Daniel Dadzie on Prime Morning, Madam Rita indicated that, but for the several calls on behalf of Oswald, she was going to disappoint him by not including the iPad.

“So you were going to disappoint him,” Daniel asked, “yes, that is true,” Madam Rita responded.

Thanks to social media, the nine-year-old will today have a memorable “Our Day” celebration in the school to fulfil what he described as his Friday, which he can’t wait to under celebrate.

One notable thing on the letter dated July 29, 2021, was the heading: “Read every tiny note” and a plea for a “Big Coke for Mrs Appiah” [his favourite teacher] as his number request.

Madam Rita explained that writing letters have for some time become her son’s medium of communicating to her since she adopted the habit of a deliberate “I have forgotten.”

“This whole writing thing started not too long because sometimes when he wants things, I will tell him that I have forgotten, I intentionally forget, that I have to confess.”

Describing Oswald, she said he is the type who “likes to give his specification about the things he wants. Even when he wants his food from a particular place, he will tell me the exact thing he wants, so that’s how we’ve been living.”

Meanwhile, many companies have pulled up to support Oswald’s mother to get the things on the list, not just for Osward but for his classmates, to make today’s ‘Our Day’ an extraordinary one.