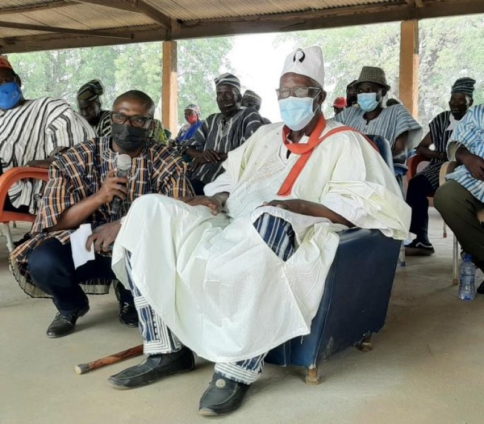 The Paramount Chief of the Builsa Traditional Area in the Builsa North Municipality of the Upper East Region, Sandem-Nab Azaksuk Azantillow, has attributed the high spate of armed robbery attacks in the Region to violent movies that the youth patronize.

He observed that movie makers introduced guns and acts of armed robberies in their movies, that he believes entices the youth to engage in such acts.

“The youth are interested in movies like that. Having watched such movies, they would want to put it into practice, hence the reason we have many armed robberies on our roads these days.”

Nab Azantilow, therefore, called on the Ministry of Tourism, Arts, and Culture to ensure that such movies were discouraged in the country to reduce the incidence of crime.

The Chief made the call when the Upper East Regional Minister, Mr Stephen Mahamudu Yakubu, paid a courtesy visit to the Palace to introduce himself and seek the support of the Paramount chief.

He said in the 1970s and 80s, television drama series like ‘Osofo Dadzie’ acted by Veteran movie actors, had no such violent acts.

“Today we are using movies to perpetrate violent acts. Such movies are to blame for the kind of situation we are experiencing these days. They teach our youth how to become rich overnight. The film industry has to put a stop to that. It is drawing us back,” the Chief said.

He urged the Minister, who is the head of the Regional Security Council, to ensure that the spate of armed robbery, which had led to some loss of lives in recent times, was reduced to the barest minimum.

On development projects in his Traditional Area, the Sandem-Nab appealed to the Minister to ensure the completion of abandoned projects in the area for the benefit of the people.

The Chief called on the District Assembly to help the Regional Minister to carry out his vision for the Region.

Addressing the Paramount Chief, Mr Yakubu said there was too much political division in the Region, saying it was time the people of the Region unite and work for development.

“Let us put the politics aside and work together. There are certain things that make us one, the languages cut across, we are in the same Region and that gives us a common destiny. No one can differentiate between us when we travel out of the Region. All they know is that we are Northerners.”

The Minister said the Region was made of smart, knowledgeable, and intelligent people and nothing should prevent residents from uniting to develop the Region together.

He appealed to all the Chiefs to support him manage the Region so that together they would develop the area and improve lives.

Mr Yakubu has since ended his tour of the Region, which began on March 23, with final visits to the Paramount Chiefs of the Talensi and Chiana Traditional Areas.