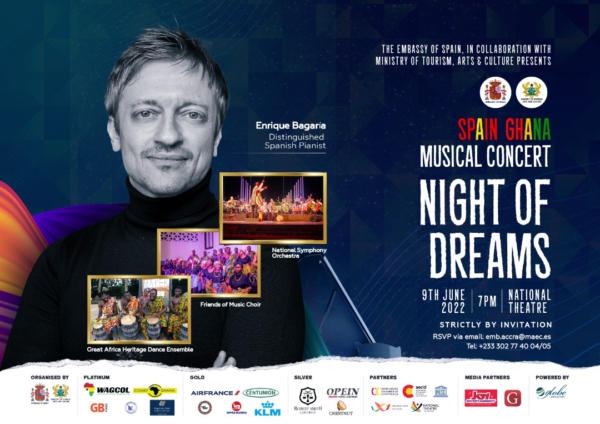 The Embassy of Spain, in collaboration with the Ministry of Tourism, Arts and Culture, will host the musical concert dubbed, “Night of Dreams” on June 9 at 7:00pm at the National Theatre in Accra.

This is part of the Ministry’s cultural diplomacy with the aim of bringing Spanish and Ghanaian societies closer together through arts and culture.

The show will consist of several performances by the renowned Spanish pianist, Enrique Bagaría, together with the National Symphony Orchestra of Ghana, Friends of Music Choir and the drums and dances of the Great Africa Heritage Dance Ensemble.

The show will take the audience on a journey through Spanish, Ghanaian and European classical music.

The musical event aspires to be an encounter of musical traditions from Spain, Ghana and Europe, as well as a way to explore forms of fusion and dialogue between them.

Rhythm and musical notes are universal and shared by all cultures. The performance also aims to revitalise the cultural scene and industry in Ghana.

What is the significance of the concert’s title, “Night of Dreams”?

The goal of the concert is to have the audience disconnect from their daily lives, their problems and concerns, and simply be transported to unknown and magical territories where their dreams can come true, through music and dance.

All of this takes place in the magnificent setting of the iconic National Theatre. During the show, there will be some musical surprises that will no doubt galvanise the audience.

During his visit, Enrique Bagaría will give a workshop at the School of Performing Arts of the University of Ghana (Legon) and will meet the students of the Universal Wonderful Street Academy in Jamestown.

Enrique Bagaría has studied in the most prestigious music schools in Barcelona, Madrid, Paris and Munich.

Throughout his career, he has received numerous awards in piano competitions, both national and international. It is worth noting the first prize in the 52nd edition of the international competition “Maria Canals” (Barcelona 2006).

He has a phenomenal international career, with performances in countries such as Spain, Italy, Germany, France, Russia, China, the United States, Ukraine, Belgium, Colombia and soon Ghana.

The Spain-Ghana Chamber of Commerce, AECID (Spanish Agency for International Development Cooperation), the Creative Arts Council UNESCO and the National Theatre are partners of the project.-