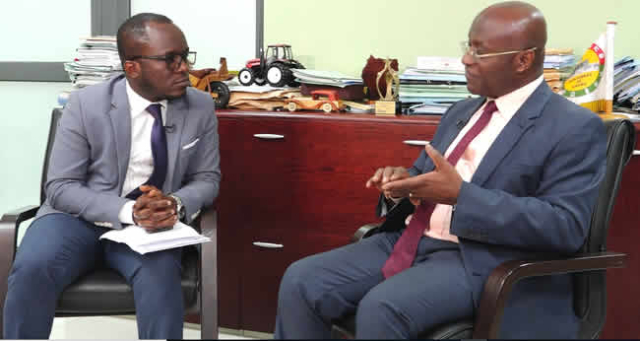 Parliament is hoping to get financial support from China for the construction of the new chamber proposed by Parliamentary Service Board.

“I understand the Chinese government would want to give us some grant, I don’t know of it is a matter of fact …it is in the nature of about $40 million,” he told host Evans Mensah, Wednesday.

The revelation comes after the Speaker, Mike Oquaye, indicated that Parliament has already set aside some È»72 million from its budget for the project.

Parliament has been sternly criticised for its decision to construct a new chamber.

The 450-seater new project has been awarded to renowned British-Ghanaian architect, David Adjaye, but Parliament is yet to determine the total cost of construction.

An architectural representation of the new chamber’s exterior

The new structure is expected to have libraries, a parliamentary museum, prayer areas for MPs of all religions, a canteen, interview areas, among others.

The current parliamentary chamber which can seat up to only 270 MPs, will be turned into an auxiliary conference facility for Parliament.

Founder of civil society group, IMANI Africa, Franklin Cudjoe, who is opposed to the decision said, it is shuddering to think that Members of Parliament (MPs), paid than the average Ghanaian, would want another chamber.

“Your bills are actually costing us as a nation,” he said on Joy FM’s Super Morning Show Tuesday.

But Mr Cudjoe is not alone. Some MPs have also condemned the plan, preferring rather for the money to be used in bettering the lives of Ghanaians.

For Kumbungu MP, Ras Mubarak, the decision is a misplaced priority and Ghanaians, many of whom are struggling to get basic social amenities, deserve better.

The interior of the proposed 450-seater chamber

However, the Majority Leader believes the project is necessary. He said while an estimated cost of $200 million has yet to be concluded on, other sources of funding are being considered.

He disclosed that Parliament has already made some representations to the Chinese government concerning the project.

“When the Chinese Ambassador visited us, we made some requests. There has not been any formal communication from them (China) that they have accepted to offer the grant,” he said.

He was, however, quick to add that the proposal is still being discussed and “we have not firmed up our minds on anything. It is still in incubation.

“We are talking about it even if we (Parliamentary Service Board) agree, the agreement ultimately would have to be approved by Parliament and if Parliament decides that ‘we don’t want it’ then so be it,” he added.

The Majority and Minority leaders of Parliament will address the media on the issue Thursday.