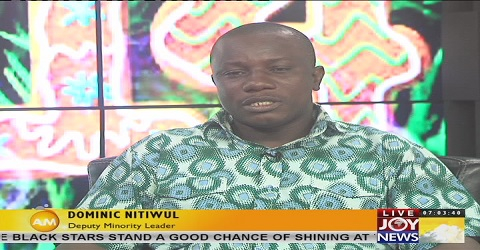 Deputy Minority Leader Dominic Nitiwul says it is important for key players in the Merchant Bank – Fortiz deal to come out clear on the details of the transaction.

Speaking on Joy News AM TALK, he stressed the key players will be invited to parliament to answer questions in order to put an end to the transaction saga. Parliament for the first time will be sitting to discuss the Merchant Bank-Fortiz deal.

The motion which is spearheaded by the Deputy Minority Leader Dominic Nitiwul, will enable parliament to set up a committee to investigate the too many controversies surrounding the transaction. ‘There are too many things that have made the situation too murky and it is important for parliament to come out clear on the way forward.’’

He stressed it was an opportunity for the key players, to come out clear on the details of the deal in order to put an end to it. “It is in their interest , whatever transaction has taken place to come public and clean, so that if it is good we applaud them, and if it is bad we put an end to it”.

Former Deputy Chief of staff, Alex Segbefia was however worried the deal has taken too much political look, and wondered if parliament had the capacity to clearly deal with it. “I have serious doubt if Parliament could devout itself to handle this issue that has taken a political hat.”

He cautioned parliamentarians saying: “I’m hoping that, when this issue gets to parliament, people will take off their political hats and just deal with issues and look at it objectively”.

Meanwhile, Fortiz Equity says the deal has been completed and the company has announced a new Managing Director, Nilla Selormey.