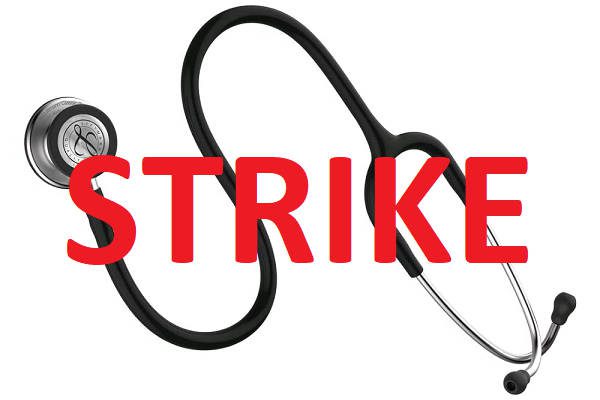 Patients across public hospitals have been left stranded as the Health Services Workers Union has begun its indefinite strike.

The industrial action is to press for better conditions of service from government.

The Union has accused government of unfair treatment, saying that their conditions of service have not been reviewed since 2016.

The leadership of the Union has told the media that the blatant disregard for the plight of its over 40,000 members across the country has compelled them to decide to lay down their tools.

The Health Services Workers Union is made up of storekeepers, record keepers, cleaners, among others.

When the JoyNews team visited the Korle-Bu Teaching Hospital in Accra on Tuesday, members of the Union had vacated their posts, and offices were under lock and key.

“The record officers are not there, the labourers are absent, which is why the patients are seated there unattended to. Of course, it is not our wish for this to happen, but the government has to listen to us,” a member of the Union at the Korle-Bu Teaching Hospital told JoyNews.

A patient at the hospital at the time of the JoyNews visit appealed to the government to intervene.

General Secretary of the Union, Franklin Owusu Ansah, has told JoyNews that the government has invited them to commence negotiations.

Meanwhile, the Deputy Minister in charge of Employment and Labour Relations, Bright Wireko Brobbey, has expressed the government’s commitment to addressing the concerns of the Union.

“We have written to them to meet them, and we are very optimistic that as we meet, we will be able to address most of the issues that will get them back to work,”

DISCLAIMER: The Views, Comments, Opinions, Contributions and Statements made by Readers and Contributors on this platform do not necessarily represent the views or policy of Multimedia Group Limited.
Tags:
Health Services Workers Union
Korle-Bu Teaching Hospital