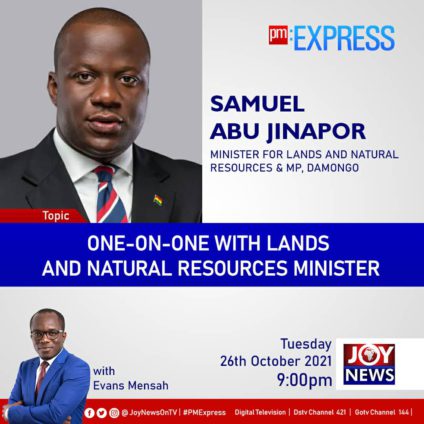 Mr Abu Jinapor who heads the Ministry of Lands and Natural Resources has been spearheading the fight against illegal mining, popularly known as ‘galamsey’ since the beginning of the year.

Recently, government launched the National Alternative Employment and Livelihood Programme (NAELP) to help deal with illegal mining. The NAELP is an initiative aimed to serve as an alternative for illegal miners who lost their source of livelihoods as a result of efforts to sanitise the small-scale mining industry.

According to President Akufo-Addo, the initiative will also create about 220,000 jobs.

On PM Express tonight, host, Evans Mensah engaged Mr Abu Jinapor, who is also the Member of Parliament for Damongo to discuss extensively on the aforementioned programme and outline measures taken by government to improve on the country’s natural resources.