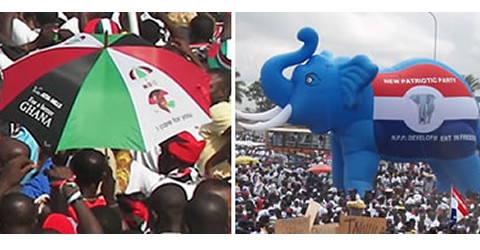 When one observes the political landscape, the déjà vu becomes so visible that, it is practically impossible to ignore. The inevitable conclusion suggests they may be reading from the same book or from the same author. In trying to understand the political elite, some fundamental terminologies are worth noticing:

Cadres: A bunch of emotive sycophants who take senselessly illegal risk to bring their political parties into power just to wail for their share of the plundered booty.

Elections: A periodic ritual of the populace, demanded by western powers that are indirect beneficiaries and largely rigged by the government in power.

Media: Highly polarized screamers who see nothing wrong with the side their affiliated with but must scrounge for fault in their opponent and smear them with outrageous lies.

Ministers of State: Tuxedo cladding, prim looking and slick-talking lobbyist who jostle so hard for portfolios they very well know they can’t manage just to offer meaningless excuses and conveniently blame their predecessors.

Parliament: A group of adults with pitiable self discipline and an unguarded recklessness who are willing to do all they can to wreck the nation as long as it does not affect, first their personal interest, then their political party’s interest.

Politics: A contest of groups who prey on the emotions of the people to plunder their resources and enrich themselves – normally characterized by character assassination of the major players.

Political Parties: A power hungry group who are ready to pounce on the nation’s resources and diligently shred them apart. Note: the party must put up some miserable structures it can make references to in subsequent elections.

President: A person who spends sometime in a former slave dungeon in Accra which seem to influence his sense of freedom, hence surround himself with some sycophants and powerful people who blur his sense of purpose and ultimately insulate him from reality.

State Agency: An organization packed with incompetent party faithful who lose their jobs whenever there is a change in government.

Judiciary: Generally, wig wearing persons who arbitrarily determine justice and often shamelessly offer justice to the highest bidder who will not relent on clamping down on any critic.