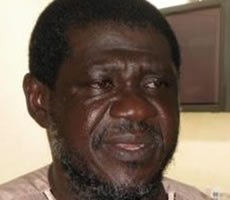 Executive Director of the Narcotics Control Board (NACOB), Yaw Akrasi Sarpong says those against the lobbying for cannabis to be legalized in the country, appear to be losing the battle.

According to Mr. Akrasi Sarpong, the issue of drugs abuse has become more of public health issue than a moral one, but the anti-lobbyists have failed to effectively state their position and have rather turned to spirituality.

"If you are in a debate and you don't make an argument, you are on the losing side. It is not about a moral issue; drug abuse is a public health issue; cannabis use is hazardous if you use it on your person. Those are scientific data but the information gap between science and the society's knowledge needs to be bridged," Mr. Akrasi Sarpong said on the Super Morning Show on Joy FM, Thursday.

Additionally, he noted that "those of us, who are against it, we are just keeping quiet hoping that when we pray in tongues and pray in our rooms, then the challenge just goes off".

The Head of NACOB dominated the headlines a fortnight ago, when he called for a debate over whether or not marijuana should be legalized in the country. His reason is that increasingly, ordinary people do not think that possessing the mentally-disturbing substance is a crime.

Clarifying this point further, Mr. Akrasi Sarpong stated that calling on government to ban marijuana outright, is not the way to dealing with the drugs issue.

He therefore called on the anti-lobbyists in the society to rise up to the challenge because; "we are on the losing side of the debate, but science and reason [common sense] are on our side".

Meanwhile, Chief Psychiatrist at the Accra Psychiatric Hospital, Dr. Akwasi Osei believes those championing the call for the product to be legalized "have already lost the war, hence the noise".

According to Dr. Osei, there is enough evidence to back the claim that the use of cannabis is causing so much destruction to society to the extent that countries that have legalized the drug are beginning to have problems controlling its use.

"Those countries that have legalized it (cannabis) are beginning to have more cannabis-related problems now [and] we cannot legalize it over here," he stated.

The Chief Psychiatrist, however, wants the existing law to be revised in order to afford persons found addicted to "Wee" as marijuana is popularly called in Ghana, have mandatory treatment rather than sending them to jail.

Ambiguity of the law

But lawyer Samson Lardy Ayenini says the existing law is not explicit on criminalizing possession and use of cannabis in the country.

Under the current dispensation, the law grants authority and reason for possession and use of narcotics but lacks clarity on what constitute the provisions of lawful authority and lawful excuse, he explained.