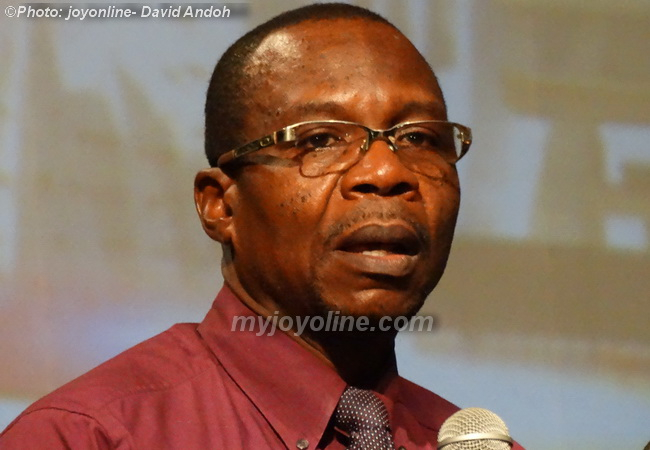 President of the Ghana Journalists Association (GJA) is under pressure to apologise for his incendiary comments following an accident that claimed the life of a presidential correspondent.

The GJA regional executives in a statement say Affail Monney's failure to call for investigations into the death of Ghanaian Times reporter Samuel Nuamah is a “shame” “unfortunate” and marks him out as a poor leader.

He rather backed the account provided by the President’s Chief of Staff Julius Debrah. His comments during an interview with Joy News has been roundly condemned by Editors and the West African Media Foundation.

Regional Executives of the Ghana Journalists Association (GJA) wish to express our disappointment at the manner in which the President of the Association, Mr Affail Monney handled the unfortunate situation that claimed that life of our brother and colleague, Samuel Nuamah of Ghanaian Times and which also resulted in some of our colleagues being admitted to the 37 Military Hospital, with some of them being placed under emergency and intensive care.

In the first place, we want to disassociate ourselves from Mr Monneys unfair comments on the issue and want to remind him that as a true leader, he ought to have the confidence to stand alone, have the courage to make tough decisions, and also have the heart for his people.

We consider the Presidents remarks in an interview with Joy FM and his inability to call for a probe disheartening.

Instead, he was reportedly crisscrossing the corridors of power for embellished answers rather than ascertaining the truth from those who were involved in the accident.

We all know that in basic journalism, we are trained to be probing even in the face of the glaring facts, rather, it is sad that the GJA Presidents answers to Joy FM’s probe, were predicated on what he got from the presidency.

He failed to call for investigation into to what led to the hiring of a commercial vehicle for the press, resulting in the fatalities.
We see that as a complete display of poor leadership quality.

We think it is a shame that the GJA President after a meeting with the presidency, ignored the accounts of his own Napoleon Ato Kittoe, forgetting the African proverb, that “he who throws a stone in the market will hit his relative”.

It was heart-rending that Mr Monney told Joy News that information he had from a clairvoyant Wisdom Awuku, a Presidential Staffer, who was comfortably seated in a 4×4 V8 vehicle, was that Napoleon was sleeping when the accident occurred and, therefore, could not have monitored or observed what happened and given an accurate account.

What the GJA President failed to notice was that Awuku, with his questionable attitude towards the media, was not one of the passengers onboard the vehicle and so how come he took the words of Awuku as the measure of truth?

Clearly, the actions of Mr Monney, stands in aversion to what the association as a group believes in and will mark yesterday as a dark day in the history of Journalism in Ghana.

What happened to Samuel could have happened to any of us, it is, therefore, shameful for the GJA President to provide answers that were apparently cooked by persons within the presidency.

What happened to our probing skills? Why is it that the GJA did not carry out any proper investigation but rather sang along with the wrong fellows in the corridors of power?.

We want it to be on record that, the President has failed all members and the best thing for him to do is to stop talking and render an unqualified apology.

To Stan Dogbey: We want to say that, he may be a presidential staffer today, but he should remember that power is not absolute, and as the Igbos say, “a bird that flies off the earth and lands on an anthill is still on the ground”.

If, today, you find yourself within the community of elders, remember that in that world, all the doors are not locked but a good number are left open and your actions may drive the crowd out of the market before the close of the days business.

The president is still in contention, therefore, Stan! beware the Ides of March and take it easy, our dear colleague.

Another unfortunate incident that  Mr Monney failed to take cognizance of was that, Mr Stan Xorse Dogbe, one of our own, who should have known better, took control of the 37-Military Hospital and had the nerve to seize and destroy a voice recorder of GBCs Yahaya Kwamoah, who was in a quest to cross-check information.

The rules are simple, Stan Dogbey is journalist and knows that irrespective of the provocation of by a journalist, you cannot destroy his working tool, point a gun at him, manhandle him or even shout at him.

However, if the president of the association did not care about that, how much more Stan Dogbey, who wrote on his Facebook wall after the incident that "Another disturbing issue that came to the fore today, the lack of professionalism of many a Ghanaian journalists, lacking either basic training and knowledge or just deliberately ignoring what is taught as ethics, basic ethics to follow, that is enough insult.

It would have been better if the GJA president had asked Stan Dogbey if collecting and destroying a working tool of a journalist and throwing it into a gutter was a professional act.

We therefore demand an immediate apology from Mr Monney to save association from further embarrassment. Stan Dogbe should also do the right thing by apologizing to the media, GBC and replace the recorder.

Our sympathy Regional Executives would like to commiserate with the family of our brother, Samuel Nuamah and the New Times Corporation for their loss.

As a member of the Presidential Press team, Nuamah always approached the regional reporters with great respect, whenever they were on a duty tour with the President.

We are devastated by the loss. It is not just a loss to the family and the employers but to the entire nation and the fact still remains that if the people we love are stolen from us, the way to have them live on is never to stop loving them.

Like John Taylor said, while we are mourning the loss of our friend, others are rejoicing to meet him behind the veil. We wish him a peaceful rest in the bosom of the Almighty God till we meet again.

Signed on behalf of the Regional Executives by: