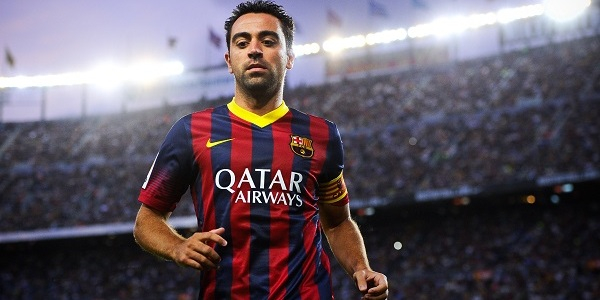 A remarkable story from France this morning suggests Paris Saint-Germain will loan Spanish midfielder Xavi from Qatar side Al-Sadd next season.

Paris daily paper Le Parisien claim the big-spending Ligue 1 champions will make an approach to take the 35-year-old on loan for the 2015-16 campaign. Outgoing Barca skipper Xavi confirmed last week that his lengthy association with the Liga titlists would conclude at the end of the current season, and that he has agreed to head to Qatar with Al Sadd.

The owner of Al Sadd is the brother of PSG chief Nasser Al-Khelaifi, drawing comparisons to the shock deal which saw Frank Lampard return to the Premier League with Manchester City for 2014-15 after signing with upstart MLS franchise (and sister club of City) New York City FC.

However that could change if the reported deal becomes reality. PSG and Barcelona drew each other in the last-eight of this season's Champions League, with Barca progressing over two legs. Having seen off Bayern Munich in the semi-finals, the Catalonians meet Juventus in the final in Berlin next weekend.