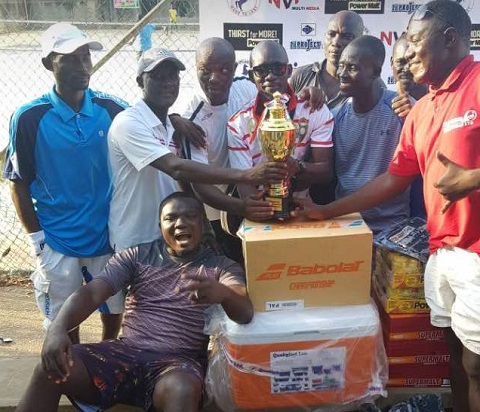 The day’s event, sponsored by 2i Project Limited, a real estate company in Tema, was supported by NVI Multi-Media, Power Malt drink and Qualiplast Ghana LTD.

This year’s edition of the 2i Project Independence Day Tennis Tourney was massively patronized by tennis lovers in Tema and its surroundings.
In all 15 games played, RMU won six, followed by TOR with five wins and Tema Tennis club also winning four games.

RMU Tennis Club won the deciding game as David Aryee and Sam Donkor ousted Kofi Badu and David Naawu from TOR tennis Club 7-1. Both clubs were tied with 5 wins each.

The winner, RMU Tennis Club, was awarded a trophy, one carton of tennis balls, an Ice chest, five creates of Power Malt drink and branded T-shirts.

Speaking to Managing director of 2i Project limited, Patrick Addo said the main purpose of organizing the competition was to bring all social Tennis players in and around Tema together to exercise and have some fun.

He added ''I am very impressed with the level displayed especially by RMU Tennis Club''. He later thanked visiting clubs for turning up for the tournament with great zeal and enthusiasm and promised his company will make next years edition even more exciting.