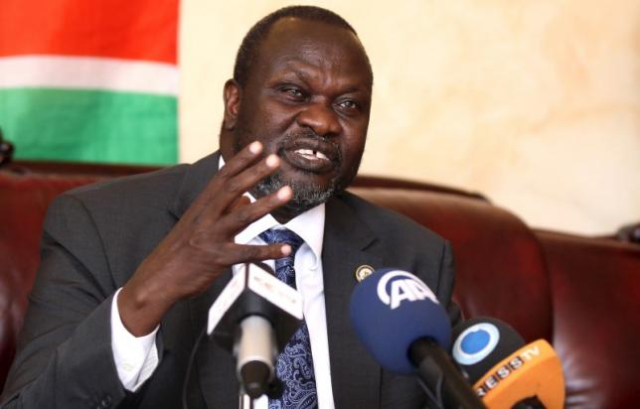 Russia said on Friday it was opposed to placing a United Nations arms embargo on South Sudan or blacklisting President Salva Kiir and rebel leader Riek Machar as such moves were not helpful to the implementation of a peace deal agreed by the pair in August.

U.N. sanctions monitors said in a report, seen by Reuters on Monday, that the U.N. Security Council should put an arms embargo on South Sudan and sanction the oil-rich country's rival leaders over atrocities in a two-year civil war.

"(It's) not conducive, not conducive for the peace process," said Russia's Deputy U.N. Ambassador Petr Iliichev, confirming that Kiir and Machar were among several names proposed for targeted sanctions by the U.N. experts in a confidential annex.

A political dispute between Kiir and Machar, who was once Kiir's deputy, sparked the civil war. But it has widened and reopened ethnic fault lines between Kiir's Dinka and Machar's Nuer people. More than 10,000 people have been killed.

On a possible U.N. arms embargo, Iliichev said: "For us it's a no go, the region is already inundated with arms, so what we need is to control the arms that are there."

Iliichev said it would be hard to enforce an arms embargo on opposition fighters, putting the government at a disadvantage.

The conflict in South Sudan, whose 2011 secession from Sudan had long enjoyed the support of the United States, has torn apart the world's youngest country. The U.N. experts said some 2.3 million people have been displaced since war broke out in December 2013, and 3.9 million face severe food shortages.

Kiir and Machar signed a peace deal in August but both sides have consistently broken a ceasefire, while human rights violations have "continued unabated and with full impunity," the U.N. experts reported.

U.S. Ambassador to the United Nations Samantha Power said on Thursday that implementation of the peace deal had stalled.

She said the 15-member Security Council would need to look at whether an arms embargo and targeted sanctions could be "a means of stabilizing the situation on the ground or getting the implementation of the agreement back on track."

"The stakes … could not be higher for the people of South Sudan for us to figure out next steps in a hurry," she said.