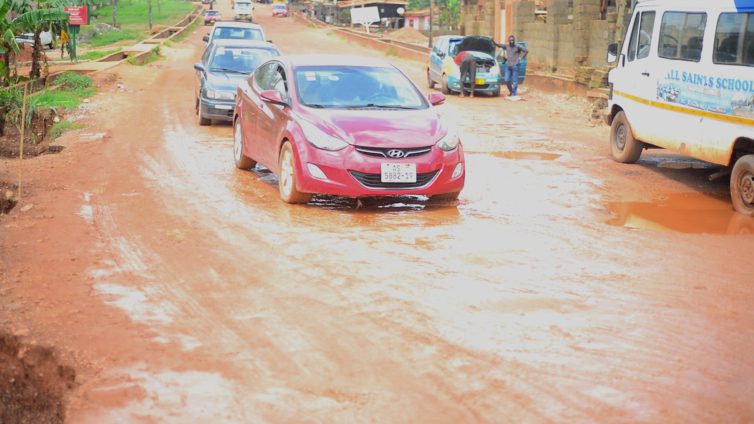 Residents of Santasi-Apire in the Ashanti region embarked on a protest, Monday morning, to register their displeasure at the deplorable nature of their roads.

They claimed that the poor road network within the community is affecting their daily activities.

The irate residents have therefore called on the government to ensure the contractor returns to site.

President Akufo-Addo, during his second inaugural speech, assured Ghanaians 2021 will be his second year of roads.

However, these residents indicate the promise has not materialized in their community.

A resident, Emmanuel Agyarko, claims a woman in labour nearly lost her life due to the bad nature of the road.

“This morning, a vehicle which was transporting a pregnant woman in labour got stuck on the road. We had to quickly rush her on foot to a nearby health facility,” he said.

The angry residents mounted blockades during the protest, preventing drivers from using the stretch.

This led to a confrontation between them and Police officers who visited the area to restore order.

The deplorable state of the road caused the unfortunate death of a driver after last Saturday’s downpour.

Residents indicate he died shortly at the hospital after crashing into a gully along the stretch.

“Drivers are refusing to commute on this road because of the poor road network. They’re charging exorbitant fares.

“We’re fed up, we can’t pay. Kindly come and construct this 3km stretch of road for us. We’re sick and tired.

“Why should a driver charge me Ghc100 from Pampaso to this area, which is only a five-minute drive,” he said.

“We came about a month ago to fill the road so that it can be motorable.

“But unfortunately, the day after we brought our equipment on site, it rained heavily. When it rains, you can’t do your graveling because the material will be wet.

“When it happens like that and you place those wet gravels on the road, you’re just going to destroy it and no vehicle can move.

“However, for this gully over here, we’ll fix it hopefully by close of the week.

“Once the rains subside, we’ll definitely come on the road and fix it,” he said.