São Tomé and Principé: How waves are washing away an island nation’s trees 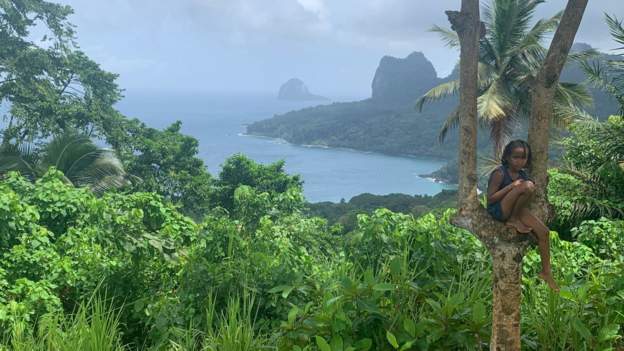 We’re in this twin-island nation in the Gulf of Guinea to find out what life is like in a country bearing the brunt of climate change.

As a tiny island nation, with the smallest economy in Africa, São Tomé and Principé is really at the sharp end of this crisis with very little money to tackle the massive problem.

Four percent of the country’s land mass has already been lost to the Atlantic Ocean. For coastal communities, it is something that everyone talks about.

We visited Praia das Burras in Principé, where entire strips of houses have already been washed into the sea.

As 36-year-old fisherman Dionesio Neto Caleeb packs dried, smoked fish into hessian bags, he told me when he first arrived the silky golden sand we were standing on used to be forest.

“It was the waves that washed the trees away,” he says.

He points to a black volcanic rock jutting out of the sea about 20m (65ft) from the shore: “That used to be hidden under the sand.”

These islands were formed millions of years ago by volcanic activity deep underwater. Today, they are mountains and valleys covered in lush, tropical rainforest.

It’s breathtakingly beautiful and home to some of the most important biodiversity in Africa; endemic species of birds, amphibians and reptiles not found anywhere else on the planet.

More than two-thirds of the islands are protected national parks and Príncipe is a Unesco biosphere because of its unique environment.

But is it possible to protect these wonders and have economic development at the same time?

“It’s difficult,” says President Carlos Vila Nova when we speak to him at the Palácio Cor de Rosa in São Tomé.

“Because our people, they say they don’t eat biodiversity. That’s true. But it’s important for the world. And it’s an honour for us to have it.”

São Tomé still has ambitions to find oil. It’s been searching for decades.

The president is asked what it would mean for the country’s climate goals if they found it. He laughs.

“I would like to increase the condition of life of my people. If it comes by the revenue from oil, then thank you.”