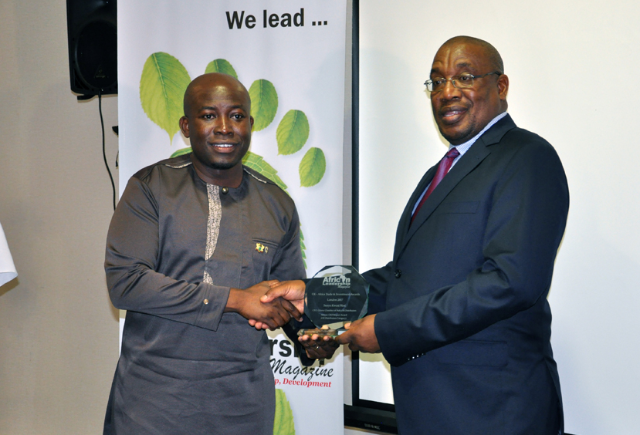 Chief Executive Officer (CEO) of the Ghana Chamber of Bulk Oil Distributors (CBOD), Senyo Hosi, has been declared as the African CEO Impact Award winner (West Africa) for his immense role in the Oil and Gas sector.

The award, according to the organisers, was in recognition of his “outstanding posturing as one of Africa’s most innovative and developmental thought leaders in the Petroleum Trading & Distribution sector; having contributed to the economic growth of Ghana.”

“Through your unrivalled leadership ingenuity, you have laid the most impactful foundation for the future prosperity of The Ghana Chamber of Bulk Oil Distributors and a key factor in the development of the economies of Africa at large. This patriotism to fatherland is commendable,” the organisers noted.

The Minister of Trade and Industry of Botswana, Mr Vincent Seretse, presented a plaque to Mr Hosi at the event.

Mr Hosi, earlier, delivered a speech as a Guest Speaker at the event and noted that “Africa’s biggest hindrance to transcending its third world status to first world is the canker of weak policymaking and weak institutions superintended by poor leadership.

“Combined with a generally passive citizenry and middle-class inertia that believe politics and policymaking is the sole preserve of politicians, a slower reform effort is our lot on the Continent.

“Even industry, including mine has not been immune to the passiveness in seeking greater policy reforms that are credible and certain. Yet, in developed countries, industry lays the golden eggs that spur economic transformation,” Mr Hosi noted.

He said the politician spans periodic terms, but businesses span the lifetime of economies and for that reason had more to lose if they do not lead transformational policymaking and management in Africa.

“We cannot be like the proverbial stomach that houses anything the mouth throws in only to warehouse poison someday and die.

Mr Hosi urged the business world to lead the policy making space by being very proactive adding that “we need to drive the quality of the process; we have to lead in the transformation of institutions into competent bodies independent and devoid of politicking. We must and can change the story of Africa.”

“We say Africa is the next economic frontier but I ask, the frontier for who? Until we begin to drive and lead policy from behind, Africa’s industry shall miss its own opportunity of becoming an economic frontier. We must change the way we think and the way we act,” Mr Hosi emphasized.

Mr Hosi expressed worry about what he termed the erection of “higher tariff and non-tariff borders even against our less competitive neighbours while adding little or no value to our raw exports.”

He said Africa’s trade with countries out of Africa was mainly driven by the extractive industries and primary level production.

“We eagerly export raw gold and metals, crude, cocoa etc. Our value addition is nothing to write home about.

The CBOD CEO said the competitive world today had no time for the unprepared.

“It is the competitive that attracts investment,” noting “to attract money, a country’s policy making architecture must be trusted, predictable and competitive.”

He said it was unfortunate for only one African country to be ranked in the top 50 most competitive countries in the world according to the World Economic Forum.

He said out of 190 countries usually ranked on the World Bank's Ease of Doing Business Report, Africa performed sub-optimally.

He noted that in the latest report, Africa had only one amongst the top 50 countries in the World bank’s ease of doing business report and four in the top 100.

None of the top four countries was from West Africa.

“These indicators suggest we are not ready to realise our potential. This must change. We must drive policies to ensure business thrives and delivers real competitiveness,” Hosi stressed.

Touching on trade between Ghana and the United Kingdom (UK), Mr Hosi said  Ghana’s trade with the UK has dipped by 30 per cent since 2012.

He said the reason for that dip was not difficult to figure out because the “UK Trade play in Ghana and most of Africa has been mainly extractive and primitive in the production chain.”

Mr Hosi stated that the use of aid to keep the influence on this level of the African economy in check will only be limited especially when the UK had been out-competed by the likes of China and the EU.

“It needs real trade not aid. As Africa rises, those with the real partnerships will yield the most and influence the rise,” the CBOD CEO stated.

He said the world must decide whether it seeks to show effort at helping Africa or to deliver the value of real help, one in which a world of return abounds.

He was also on the front cover of a special edition of the African Leadership Magazine, which was unveiled at the event.

The magazine, which was would be distributed at the event, captured a detailed coverage of Mr Hosi’s achievements.