Five-time Grand Slam champion Maria Sharapova is “saying goodbye” to tennis at the age of 32.

In an article written for Vogue and Vanity Fair, Sharapova said her body “had become a distraction” after a struggle with shoulder injuries.

The Russian won her first Grand Slam at Wimbledon in 2004 aged 17 and completed the career slam – all four major titles – by winning the French Open in 2012.

In 2016, she served a 15-month ban after testing positive for meldonium.

After returning from her ban in 2017, Sharapova struggled to recapture her best form and suffered from a number of injuries.

She has dropped to 373 in the world, her lowest ranking since August 2002, and has lost in the first round of her past three Grand Slam tournaments.

In announcing her retirement, she said: “I’m new to this, so please forgive me. Tennis – I’m saying goodbye.

“Looking back now, I realize that tennis has been my mountain. My path has been filled with valleys and detours, but the views from its peak were incredible.

“After 28 years and five Grand Slam titles, though, I’m ready to scale another mountain – to compete on a different type of terrain.

“That relentless chase for victories, though? That won’t ever diminish. No matter what lies ahead, I will apply the same focus, the same work ethic, and all of the lessons I’ve learned along the way.

“In the meantime, there are a few simple things I’m really looking forward to: A sense of stillness with my family. Lingering over a morning cup of coffee. Unexpected weekend getaways. Workouts of my choice (hello, dance class!)”

Sharapova said her 6-1 6-1 first-round defeat by Serena Williams at last year’s US Open was the “final signal”.

“Behind closed doors, 30 minutes before taking the court, I had a procedure to numb my shoulder to get through the match,” she said,

“Shoulder injuries are nothing new for me – over time my tendons have frayed like a string. I’ve had multiple surgeries – once in 2008, another procedure last year – and spent countless months in physical therapy.

“Just stepping on to the court that day felt like a final victory, when of course it should have been merely the first step toward victory.”

Sharapova did not play again in 2019 after that defeat at Flushing Meadows and has played just twice this year, including a straight sets loss to Croat Donna Vekic in the Australian Open first round, her last competitive appearance.. 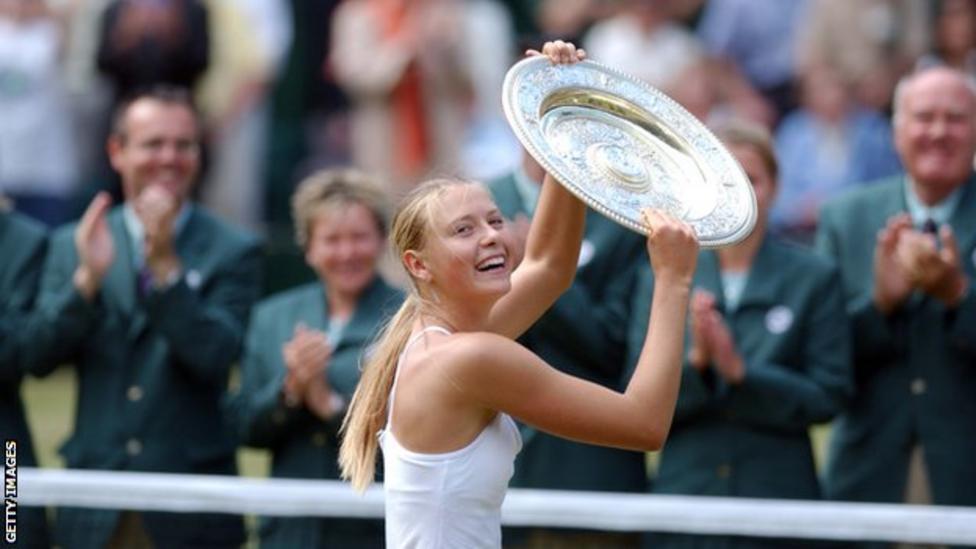 Sharapova shot to stardom in 2004 aged just 17 when victory over Serena Williams saw her become the third-youngest woman to win the Wimbledon singles title.

She would go on to become one of the most high-profile names in women’s sport, winning 36 singles titles and earning more than $38m (£29m) in prize money.

In 2005 she became the first Russian woman to become world number one and won her second Grand Slam singles title at the US Open the following year.

But 2007 saw the first of Sharapova’s struggles with injury, as she missed most of the clay-court season with a shoulder problem.

She would return to form and fitness to win the Australian Open at the start of 2008, but a second shoulder injury kept her off tour for the second half of the season, meaning she missed the US Open and Beijing Olympics.

In 2012, Sharapova captured the French Open at Roland Garros to become the 10th woman to complete the career Grand Slam, before winning Olympic silver in London.

Yet another shoulder injury saw her miss the second half of the 2013 season, although she returned the following year to win her second French Open, and fifth and final Grand Slam.

In March 2016, Sharapova told a news conference she had tested positive for meldonium at the Australian Open.

Sharapova said she had been taking the drug since 2006 for health problems and was unaware it had been added to the banned list, insisting she had “not tried to use a performance-enhancing substance”.

She was banned for two years, later reduced to 15 months following an appeal to the Court of Arbitration for Sport.

She returned to tennis in April 2017, winning what would be her final career singles title at the Tianjin Open in October that year.

Sharapova reached the quarter-finals at the 2018 French Open and the last 16 of the Australian Open at the start of 2019, but injuries and loss of form began to take its toll.

‘It was a pleasure to share the court with you’ – reaction

Following Sharapova’s announcement, hercoach Riccardo Piatti tweeted: “It’s been an honour to have worked with such an amazing athlete and person. I’ll miss her on court and outside. I’m sorry we couldn’t work together for longer. But I know our paths will cross again and I can’t wait for it. In the meantime, good luck with everything.”

Two-time Grand Slam champion Petra Kvitova said it had been “a pleasure” to share a court with Sharapova.

The Czech added: “We always had great battles when we played and I have so much respect for your hard work and the way you always fight for everything. You have achieved a lot in your life and I know this is just the start.”

Meanwhile, tennis legend Billie Jean King added: “From the day Maria Sharapova won her first Wimbledon title at age 17, she has been a great champion. A five-time major champion and a former world number one, her business success is just as impressive as her tennis achievements. Maria, the best is yet to come for you!”

Reacting after his victory over Philipp Kohlschreiber at the Dubai Open on Wednesday, world number one men’s player Novak Djokovic asked the crowd to offer a round of applause for Sharapova.

“She is a great fighter, as dedicated as someone can really be in our sport,” the Serbian 17-time Grand Slam champion said. “The will power and willingness to overcome the obstacle she had, with her injuries and surgeries and trying to fight to come back to the court and play at her desired level – it’s truly inspirational to see what a mind of a champion she has. At the end of a fantastic career she can be proud of herself.”

The author of a truly iconic #Wimbledon momentâœ¨