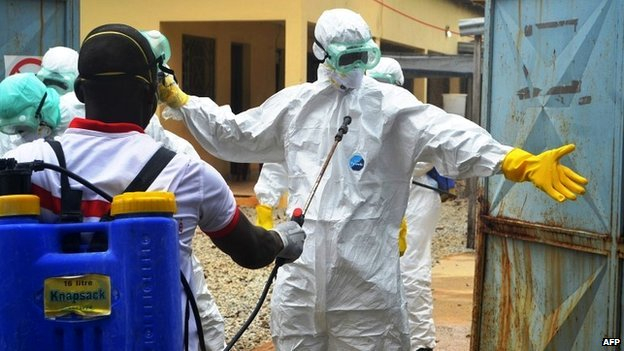 A village in Sierra Leone has become one of the last areas in the country to be released from an Ebola quarantine.

President Ernest Bai Koroma lifted the quarantine in person, sparking wild celebrations from the more than 500 people who had been isolated for the past three weeks.

He said it was the beginning of the end for the Ebola outbreak in Sierra Leone.

More than 11,000 people have died since the start of the Ebola outbreak in parts of West Africa.

One young woman who gave birth three days into the quarantine told the BBC's Umaru Fofana that she now felt "happy and free".

Being under quarantine with armed soldiers blocking anyone from going in or out of the village felt like living in "a real prison", one resident told our correspondent.

The northern village of Massessebe in the Tonkilili District was placed under quarantine after a visitor to the area died from the virus, becoming the first case in the area for 150 days.

There are now only two Ebola patients left in the entire country, both of whom were infected by the victim in Massessebe village.

The World Health Organization says Ebola can be defeated by the end of the year.

Only a few new weekly cases have been recorded in West Africa recently.