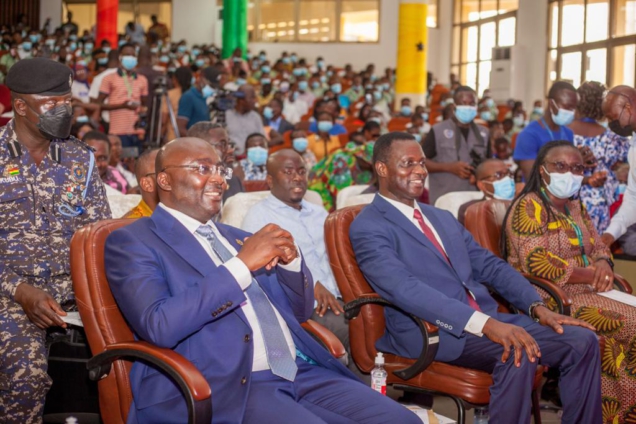 Launching the new initiative at the Kwame Nkrumah University of Science and Technology (KNUST), Vice President Dr. Mahamudu Bawumia said he expects an increase in access to student loans for tertiary students each academic year.

Prior to the implementation of the policy, students were required to secure a guarantor before their loan applications were approved.

This proved to be a major barrier for many students who needed the loans to finance their tertiary education.

Data from the SLTF indicate that the Fund is able to assist less than 10% of the eligible student population, partly because of difficulty in finding guarantors.

The managers of the fund expect a significant increase in loan applications as a result of the new policy.

“With the removal of the guarantor requirement, we have put tertiary education within the reach of hundreds of thousands of students nationwide” said Nana Kwaku Agyei Yeboah, CEO of the SLTF, in his address.

Loan applicants are now required to fill an online form and go through biometric verification of their Ghana cards to access the loan.

The guarantor requirement was built into the loan application process to assist the administrators of the fund to recover the loans when they are due.

Guarantors played a number of important roles, including helping the SLTF trace borrowers.

In some cases, when borrowers defaulted, the guarantors were called on to defray the debt.

Even though guarantors have been very useful in putting pressure on borrowers to repay their loans, and in tracing borrowers who did not want to be found, it is in only about 6% of cases that guarantors actually have to pay off the debt.

The Fund managers are confident that the data contained on the Ghana card, its integration with the SSNIT and tax identification numbers, as well as linkages with other databases, makes the use of guarantors superfluous in its operations.