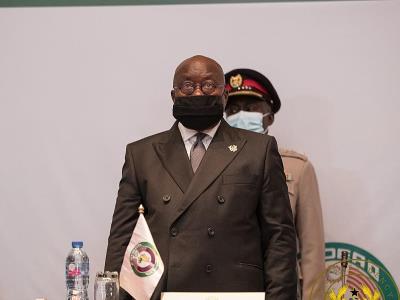 As violence increase in Nigeria over protests against the disbandment of the Special Anti-Robbery Squad (SARS), a lot of people are calling on President Nana Akufo-Addo to speak on the matter.

As the current Chairman of the Economic Community of West African States (ECOWAS), several Ghanaians on social media have called on him to openly condemn the situation which has resulted in the death of some protestors.

People are dying in Nigeria and as the ECOWAS chairperson, you are doing nothing about it.Why??? @NAkufoAddo

@ecowas_cedeao chairperson @NAkufoAddo, kindly speak up against the brutality in Nigeria sanctioned by your counterpart @MBuhari. It was a peaceful protest until the dogs were unleashed. #EndSARS #EndPoliceBrutalityinNigeraNOW

@NAkufoAddo is a disgrace, meanwhile instead of us to leave politics and support @Bridget_Otoo to force the the ECOWAS chairperson to do something about his territory, they choose to attack her. Infact Ghana has no future

Our President, Nana Akufo-Addo, chairperson of ECOWAS, & President Ramaphosa, chairperson of the African Union have said nothing about #EndSARS and the state-sanctioned violence against Nigerians. But it’s ok because while someone’s trouble is here, someone else’s is on the way.

Our President, Nana Akufo-Addo, chairperson of ECOWAS, & President Ramaphosa, chairperson of the African Union have said nothing about #EndSARS and the state-sanctioned violence against Nigerians. But it’s ok because while someone’s trouble is here, someone else’s is on the way.

I wish to believe @NAkufoAddo is doing something about this issue in Nigeria as ECOWAS chairperson. If not I’d be very disappointed in him. As for @MBuhari shame on u . There’s no excuse for this insensitivity. #EndPoliceBrutalityinNigeraNOW #EndSARS #aishayesufu

Of course he should. What’s the use of he being ECOWAS chair if he can’t speak to issues in member states. He’s busily campaigning for another term and his supporters will attack anyone who reminds him of he is supposed to do. #JoySMS

More than 70 Lives have been lost and the Ecowas chair has still said and done nothing, then the citizens of his country should be very afraid by now!!#EndSARS

The president being the ECOWAS chair means he must be reactive but not hastily like you lots suggest..

It’s really difficult to just say anything.. There are meetings, calls going on.. He tweeting doesn’t end there, actions must follow!! Relax

He is the ECOWAS chairman and he needs to say something #EndSARS https://t.co/BFXrMCHOgR

Mr President and ECOWAS Chair @NAkufoAddo we need you to speak up against the violence being meted out to Nigerians by the police. Their demand is for an end to police brutality not to be slapped with even more. Impress on @MBuhari to stop. Signed: Ghanaian and African citizen.

Ghana’s President twitter is busily running campaign towards its election. He’s is the chairman of ECOWAS. He hasn’t said a word since this crisis.
I’m shocked and it hurts so much.

Excuse me Sir, what is Ecowas doing about #NIGERIABLEEDS #LekkiMassacre #BuhariIsaMurderer there’s more happening than your reelection

Article 45 of the Ecowas protocol says when there is violation in human right as observed in Nigeria, Ecowas can act. Unless u want to tell me what is happening in Nigeria is cool . pic.twitter.com/BIqSfwH7yH

@NAkufoAddo you cannot sit on your hands and pretend you dont know what is happening any longer. You are the ECOWAS chairperson or whatever do something!! Convene a meeting do something for love of god!!! pic.twitter.com/OEskjTpt6k

Yes, as the Chairperson of ECOWAS, I think he has to make a statement, as far as the peace and safety of citizens of an ECOWAS country like Nigeria is at stake

Honestly, I don’t think he should..there are diplomatic tensions btn the 2 countries already. However, I think he can call for an ECOWAS executive meeting and handle it from there #JoySMS https://t.co/HuewHhooOt

Fellow Africans,Ur current ECOWAS chair, @NAkufoAddo President of Ghana has become deafen on the innocent killings of citizens in Nigeria.@UN please rescue Nigerians and the entire African Continent from our greedy Leaders.@MBuhari Stand as a President and speak. pic.twitter.com/Ct2VC5vyKC

Why is the Chairman of ECOWAS @NAkufoAddo silent on what’s happening in Nigeria? #EndSARS

Thousands of demonstrators, many of which were youth took to major streets in Nigeria to register their displeasure over the activities of the SARS unit which they say abuses its power.

Although government announced some days later that the unit had been reformed, the protesters persist that the reason for their agitation hasn’t been fully met.

Following some cases of sporadic violence at some protest spots which led to the, a 24-hour curfew was put across Lagos, the BBC reports.

Nigeria’s most populous city is home to approximately 20 million residents.

DISCLAIMER: The Views, Comments, Opinions, Contributions and Statements made by Readers and Contributors on this platform do not necessarily represent the views or policy of Multimedia Group Limited.
Tags:
#EndSARS
ECOWAS
Nana Akufo-Addo
Nigeria