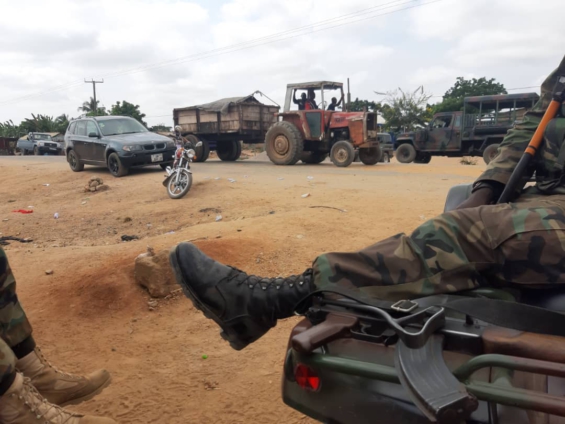 First, I strongly condemn the actions of some residents of Dome Faase for assaulting two military men they suspected were land guards. Ghana is not a banana Republic. Whether they were military personnel or not, landguards or otherwise, there is absolutely no justification for such a backward mob mentality. It could have been worse.

It is however worth inquiring to ascertain the veracity of the Deputy Defense Minister Major Derrick Oduro’s (Rtd) statement on the issue. He opined that the officers were on an officially sanctioned duty.

If this statement is anything to go by, it must have been such a poorly organized intervention that lacked proper coordination synonymous with our military.

Consequently, I suspect a grand attempt to cover up because it doesnt make sense deploying soldiers so ill-equipped and without Armoured Personnel Carriers (APCs) to such a volatile community that has been reeling under the threat of violence over lands claimed by two belligerent parties.

Haven’t we learnt hard lessons enough? Why does it have to be the military and not the police?

For years on end, I have observed with disdain how some military men are used by estate developers and other individuals for landguard activities. Most depressingly, some soldiers are used by money lenders to collect debts from “stubborn” debtors.

I am also absolutely gobsmacked over the deployment of military men to the area to arrest those individuals who perpetrated the act. Is it the work of the military to arrest criminals? Not surprisingly, reports of abuse of residents of Dome Faase by the military are beginning to trickle in.

Almost all the young men in that area have fled. Reports indicate that 76-year-old Imam in the area who had nothing to do with the incident has also been arrested. This is further fueled by the spirit of “comradeship” in the army; touch one, touch all. Remember I spoke about a backward mob mentality? Can you spot the difference? Absolutely not.

It is therefore not an accident to find people who can afford, resort to land guards to protect their lands or unleash terror to grab lands. The court system is not helping enough.

Land administration has gone beyond being a developmental issue, it is a human and physical security nightmare. About 6 of the 17 Sustainable Development Goals (SDGs)  are land-related.

The World Bank has financed the Land Administration Project on two different occasions, yet, no progress.

To be able to solve the issue of land guards and it’s related security implications to the country, we have to approach the issue strategically and from source. A progressive land administration regime.