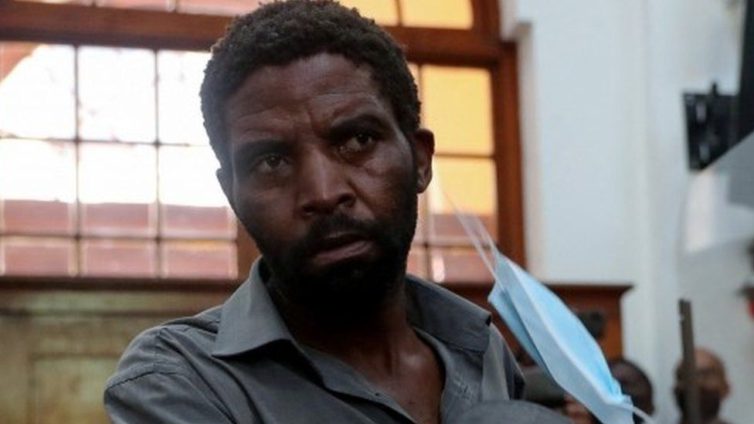 A man detained for setting South Africa’s Parliament in Cape Town on fire was found at the site with explosives, prosecutors have alleged.

Zandile Christmas Mafe, 49, appeared in a city court on charges under the Explosives Act, as well as for arson, theft and a break-in.

His lawyer said he was innocent of all the charges.

The fire first broke out on Sunday, totally destroying the National Assembly or lower chamber.

No one was injured in the blaze, but it has left the nation shocked.

Mr Mafe is the only person arrested in connection with the fire.

He looked unkempt and dazed in court, reports the BBC’s Nomsa Maseko from Cape Town.

As he arrived in the dock wearing shorts and a creased shirt, he removed his face mask and did a 360-degree turn as cameras flashed.

Police said Mr Mafe had been arrested within the parliamentary complex after the fire started, but his lawyer said the wrong person had been detained.

The case was postponed for seven days to allow police to continue with their investigations.

Firefighters say they have managed to contain the blaze that reignited on Monday.

RE-EMERGENCE OF FIRE IN THE NATIONAL ASSEMBLY BUILDING: Firefighters are on the scene. #ParliamentFire pic.twitter.com/MXmklIS9MG

On Sunday, President Cyril Ramaphosa – who admitted the building’s sprinkler system had not functioned properly – praised firefighters for responding to the “terrible and devastating event” in minutes.

Government minister Patricia de Lille separately admitted that CCTV cameras had not been monitored at the time the initial fire started.

The chairperson of the upper chamber, Amos Masondo, said Sunday’s fire had led to the “complete burning down” of the National Assembly chamber. Other areas of the parliamentary complex – parts of which date back to 1884 – were also badly damaged.

The parliament is not currently in session because of the holidays, and no-one was injured.

The building is home to thousands of treasures including historic books, photographs and important works of art, which officials said had been saved.

There had been particular concern that the valuable Keiskamma Tapestry, which is 120m (394ft) long, and documents South Africa’s history, may have been damaged or destroyed.

It is expected to be many months before the building can be used again.

Cape Town Mayor Geordin Hill-Lewis said the city’s council chamber would be made available as an alternative place for parliament to meet.