A leading South African university says it is investigating Nazi-inspired posters that have appeared on campus notice boards.

Stellenbosch University condemned "racial superiority and any attempts to polarise" the campus, a spokesman said.

The posters, reminiscent of Nazi propaganda to rally support for Hitler, called for a "Fight for Stellenbosch".

The university has been fraught with racial tension since white minority rule ended in 1994.

During apartheid, it was an elite institution for Afrikaans-speaking white people. 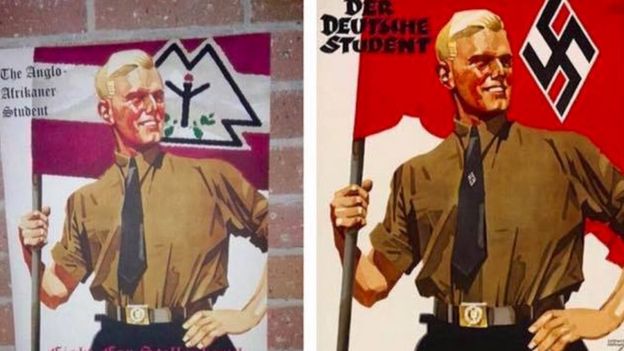 The university has been hit by protests over language policy, tuition fees, and alleged racism.

Following calls for Afrikaans to be replaced with English as the main language of instruction, the university says it has adopted a multilingual policy and no student is excluded on the grounds of language.

Most black people in South Africa prefer to speak English than Afrikaans.

The posters were issued in the name of "The New Right", and called on "Anglo-Afrikaner" students to attend a meeting on Thursday to "Fight for Stellenbosch".

The images were a recreation of the Nazi-era League of German Girls, and of slogans such as "The German student fighting for the Fuhrer and the people".

The posters have caused outrage, with people saying they were the latest example of racism and inequality at the prestigious institution, says the BBC's Pumza Fihlani in the main city, Johannesburg.

In a statement, the university said it had so far identified three individuals who were allegedly linked to the "totally unacceptable" and "highly offensive" posters.

Investigations, led by the university's Equality Unit, were continuing, it added.

"There seems to be deliberate mischief-making involved and, if that should be the case, disciplinary steps will be taken," Vice-Chancellor Wim de Villiers said.