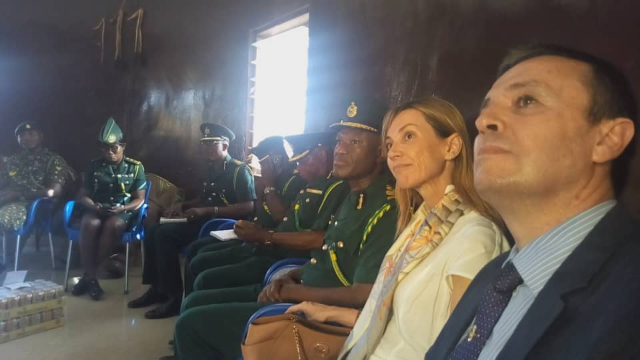 The Spanish Ambassador to Ghana, Her Excellency Alicia Rico Pérez del Pulgar and the Comptroller-General of Immigration, Kwame Asuah-Takyi have paid a courtesy call on the Chief of Tamale at the Dakpema Palace.

The visit gave the two leaders an opportunity to officially meet the newly crowned Dakpema of Tamale and to congratulate him on his new position.

In his address, the Comptroller-General of Immigration informed the Dakpema that the Ghana Immigration Service and the Spanish Ambassador came to his jurisdiction to commission an ultra-modern Migration Information Center (MIC) for the people of Tamale.

He said ¨the MIC which has been commissioned would provide adequate travel information to prospective migrants. This is one of the ways to reduce irregular migration¨.

The CGI, Kwame Asuah-Takyi said, ¨Immigration Officers and Men in Tamale has already begun outreach and sensitization programmes in his locality, educating the people on the dangers involved in travelling without receiving adequate knowledge on ones´ safety.

He advised the youth not to be persuaded and be pushed into modern-day slavery migration which can make them overwork in a strange land searching for non-existing jobs and riches.

He said, ¨the youth can motivate themselves and stay in Ghana to develop their country and provide their quotas rather than ignorantly falling into the hands of some unscrupulous individuals who are only interested in exploiting them¨.

On her part, the Spanish Ambassador encouraged the gathering and indeed the people of the North to make good use of the opportunity provided them with the establishment of the Center by utilizing it for the purpose it has been established for.

She said ¨her Government is interested in creating avenues to protect the lives of prospective migrants who may due to non-availability of the right information, migrate to the peril of their lives. Hence, the establishment of the MIC to provide free expert advices and accurate information to Ghanaians to prioritize safe migration¨, she added.

Welcoming his august visitors, the Dakpema expressed his excitement and appreciation to the Ambassador and the CGI that he conferred special prayers on them for prosperity, protection and long life. He appealed for more incentives and assistance for the people of Tamale.