Special voting starts across the country 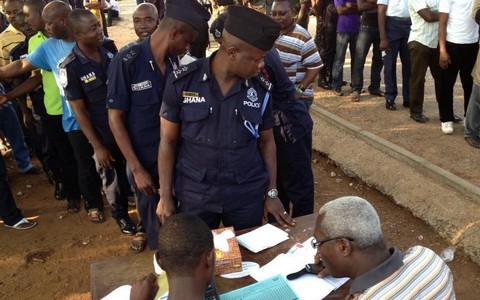 The special voting for Electoral Commission staff and security personnel who will be working on voting day, December 7 has started in earnest across the country.

Joy FM’s Election Headquarters’ visit to some of the centres indicates that voting has started and the process is going smoothly.

Joy News’ Eric Ahianyo, who visited the Cantonments polling centre reported that even though there was initial confusion over how voting was supposed to be done, voting finally started around 7:30 am.

According to an Electoral Commission (EC) official, who spoke to Election Headquarters, the officers and the EC staff did not know where to vote due to a new rule that they will be voting alphabetically.

There will be voting in 41 centres in Greater Accra alone and voters will be voting for both Presidential and Parliamentary candidates. The votes will however will not be tallied today.

He said about 60 security personnel and electoral officers were voting.

From Ofori Krom in the Ashanti Regional capital of Kumasi, Kwabena Ampratwum reported that all the necessary logistics were provided on time and the voting was progressing.