Swaziland's King Mswati III has announced he is renaming the country as the Kingdom of eSwatini.

The monarch announced the official change at Golden Jubilee celebrations for the 50th anniversary of Swazi independence.

The celebrations also marked the king's 50th birthday. The southern African nation is an absolute monarchy.

The king, known as Ngwenyama or "the lion", is known for his many wives and for his adherence to traditional dress.

The new name, eSwatini, means "land of the Swazis".

Swaziland is a Commonwealth member.

The BBC's Nomsa Maseko in Swaziland says the announcement of the name change has angered some in the country, who believe the king should focus more on the nation's sluggish economy.

The country is Africa's last absolute monarchy, and in recent years demonstrators have called for a shift to democracy.

The son of Sobhuza II, who reigned for 82 years, King Mswati III currently has 15 wives. According to official biographers, his father took 125 wives during his reign.

While the official name change was unexpected, King Mswati III has been referring for years to Swaziland as the Kingdom of eSwatini.

This was the name the king used when he addressed the UN general assemblyin 2017 and at the state opening of the country's parliament in 2014. 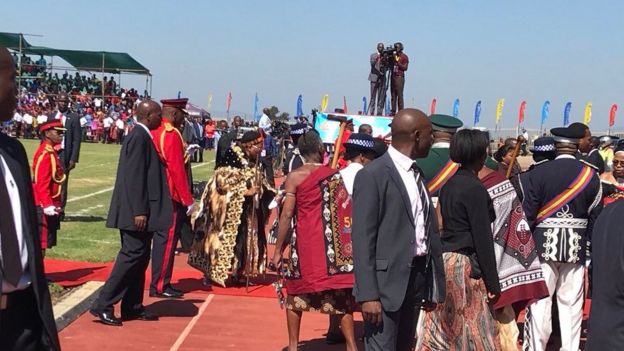 The name change was announced at the country's joint independence and monarch's birthday celebrations
Tags: