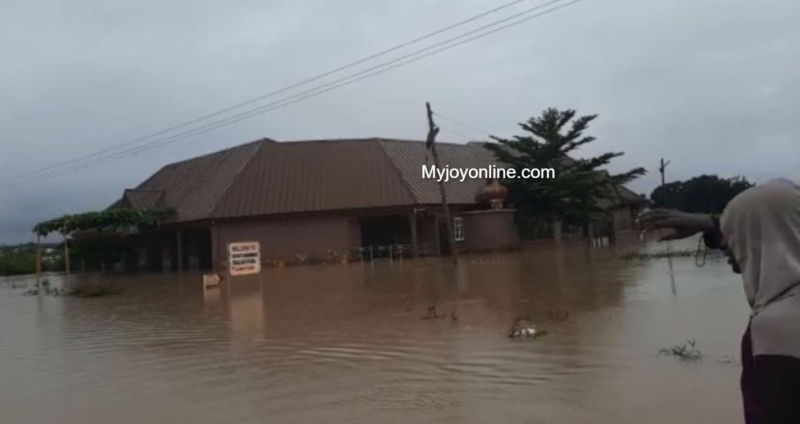 Several homes in parts of Tamale have been inundated after heavy rainfall on Monday, August 30, 2021.

The downpour lasted about three hours, affecting areas including Fou, Taha, Vettin, Gumani and Kalariga among others in the Northern Regional capital.

Residents had to struggle to escape the ravaging flood.

This is the second major flood to hit the town in three days.

Personnel from the Ghana National Fire Service was called in to rescue some residents who were trapped in homes around the Fou Last Stop.

Many of them were seen retrieving as much property as they could salvage.

“From the way the rainwater was coming, I realized that if I don’t go back, me and my motorbike will fall off,” one of them said.

Others, whose homes were beyond safety, looked on helplessly.

Some of them climbed onto walls to avoid drowning, in the hope that help would come soon.

On Saturday, August 28, floodwaters swept through the Kalariga community in the Tamale Metropolis, displacing several families and destroying properties.

The flood water is said to have filled the main drain in the area and entered homes while families were asleep.

Residents who have experienced similar incidents before, described this year’s as one of their worst floods in recent times.

Two days later, other suburbs of the town have suffered a similar fate once again.

This time the victims are calling on the government to improve drainage systems in the area to avert such occurrences in the future.

Some of them partly blamed a bridge which was recently constructed.

“The government should make sure that any engineer who supervises a shoddy work should be queried… We need about three bridges and you build one… They’re just wasting government money,” another victim lamented.

It is not yet clear whether any casualties have been recorded.

The residents are also calling on the National Disaster Management Organisation (NADMO) to come to their aid.