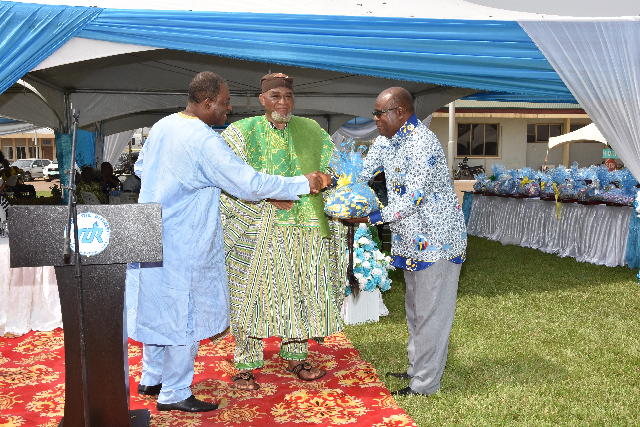 The Chairman of the Board of Director of Tema Oil Refinery (TOR) Ltd, Tongreaan Kugbilsong Nanlebegtang has pledged the commitment of both the Board and Management to revive the refinery’s operations to one that is viable and competitive.

Speaking at a special send-off ceremony to honour a number of retired staff in recognition of their dedicated services to TOR, the chairman stated that the company was vigorously embarking on key strategies to turn the refinery around.

He therefore called on staff to eschew politics at the workplace and act with renewed determination and commitment to realize this goal.

The Board Chairman lauded the retirees for their support and loyalty to TOR in both good and challenging times.

The Managing Director, Isaac Osei in his farewell message to the retired staff, acknowledged their startling contribution and expressed gratitude to the retirees for their allegiance to the company. He commended their efficiency and dedication in their respective roles spanning 15 to 38 years and wished them the best in their retirement lives.

The Chairmen of the two union groups at TOR namely PMSU of UNICOF Kofi Amo-Asante and GTP & CWU of TUC Elton John Botchwey respectively on their parts lauded the invaluable contributions of the retirees and said that TOR will tap into their rich expertise to advance the course of the refinery.

The send-off ceremony is a programme instituted by TOR to recognize and celebrate retired employees for their long service, commitment and dedication to duty when they were with the company. A total of 50 staff who retired from 2015 to 2017 were honoured. In recognition of their meritorious service to TOR, the retirees were presented with citation plaques of honour and gifts.

The ceremony was attended by the Municipal Chief Executive of the Tema Metropolitan Assembly Felix Mensah Nii Anang-La, the District Chief Executive of Ningo Prampram Jonathan Teye Doku, Executives of the TOR Pensioners Association, Members of the Board of Directors at TOR, General Managers and Managers of TOR, Security Agencies Representatives at TOR, and the refinery staff.