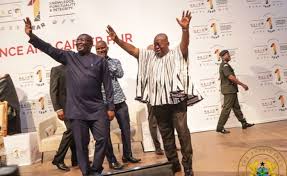 President Akufo-Addo has thanked Ghanaians for their overwhelming show of love by keeping him in office.

In a tweet few minutes after the Electoral Commissioner annouced him as winner of the election, he said, “Thank you Ghana for voting 4more.”

The tweet showed a picture of him and his Vice Dr Mahamudu Bawumia all clad in white laughing with joy.

This is Nana Akufo-Addo’s second win in a presidential elections.