Tribal politics and other problems with African democracy 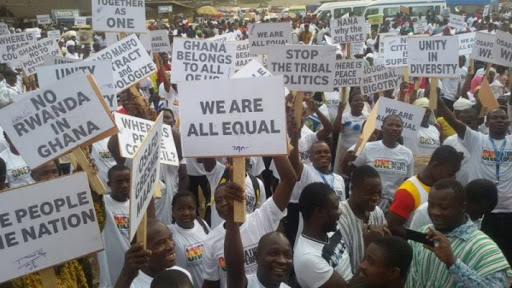 Nothing in Nigeria’s political history captures her problem of national integration more graphically than the chequered fortune of the word tribe in her vocabulary. Tribe has been accepted at one time as a friend, rejected as an enemy at another, and finally smuggled in through the back-door as an accomplice. – Chinua Achebe (The Trouble with Nigeria)

Similar to Nigeria, a major challenge to democracy in Africa is not the prevalence of ethnic diversity, but the use of identity politics to promote narrow tribal interests, i.e. tribalism.

In Africa, a great deal of the people find their identity in ethnicity in place of nationality; and this has an effect in their political disposition.

For example, in the early days of Ghana’s independence, the problem of tribalism plagued the body politics of the nation – with the likes of the separatist National Liberation Movement, Northern People’s Party, Ga Shifimo Kpee, Anlo Youth Organisation, Muslim Association Party, etc. – coming to the fore.

As a result, the government outlawed these parties when it enacted the Avoidance of Discrimination Act, 1957, to ban political parties formed on a tribal, religious or regional basis.

Now, the Ghanaian Constitution enjoins every political party to have a national character, and membership shall not be based on ethnic, religious or other sectional divisions.

Kenya’s 2007-08 post-election violence revealed the extent to which tribal forces could quickly bring a country to the brink of civil war.

It took Kenyan political parties more than a decade to reconcile after a petition was brought by Mr Raila Odinga and his party (Orange Democratic Movement) to the Kenyan Supreme Court and it was declared that the 2017 presidential election was invalid.

A research carried out on Kenya by Stephen Keverenge at the US-based Atlantic International University in 2008 (subsequent to the election violence) revealed that 56% of 1,500 respondents did not know that their parties had manifestos.

The manifestos are generally issued late because much of the effort goes into building tribal alliances. So the new Constitution of Kenya seeks to address the issue of ethnicity by ensuring that a president needs broad geographical support to be elected.

For example, in 2018, the Centre for Democratic Development in Ghana reported that the Ghanaian President is leading the nepotism chart in government which provides a hunting ground for misgovernance characterized by massive corruption.

Ideally, the concept of political party is brought forth by the socio-economic system, i.e., a question of which class of society you belong – not your tribe. Often than not, this is not the situation in Africa, unlike in some other societies. In the absence of efforts to build genuine political parties that compete on the basis of ideas, many African countries have reverted to tribal identities as foundations for political competition and conflicts.

Owing to this, the Biafran War in Nigeria, is one of the bloodiest civil war to emerge on the continent. And the political tension in the country during general elections attest to the downside of tribalism. That notwithstanding, the renaissance of Rwanda in the past twenty-six years after the country was torn apart by the genocide is a legacy of why tribal politics must be avoided.

In the dialogues of Plato, the founding father of Greek Philosophy – Socrates – is portrayed as hugely pessimistic about the whole business of democracy.  In Book Six of The Republic, Plato describes Socrates falling into conversation with a character called Adeimantus and trying to get him to see the flaws of democracy by comparing a society to a ship.

If you were heading out on a journey by sea, asks Socrates, who would you ideally want deciding who is in charge of the vessel? Some random passenger, or a well-trained, educated, and experienced captain? After the captain is selected as the obvious choice, Socrates then extends the comparison to the state, asking why we would let just anybody try to manage the ship of state.

Socrates’s point was that voting in an election is a rational decision, not a random intuition. And letting the citizenry engage in politics without an education is as irresponsible as putting a random passenger in charge of a ship to sail into a storm. Thus, according to Socrates, democracy without education breeds demagoguery.

Through education people are brought to a new paradigm. The dynamics of human development is not in doubt. The changes in our society demand the renewal of our minds or we impoverish. Tribalism should no longer saddle Africa’s social development.

DISCLAIMER: The Views, Comments, Opinions, Contributions and Statements made by Readers and Contributors on this platform do not necessarily represent the views or policy of Multimedia Group Limited.
Tags:
African politics
Democracy