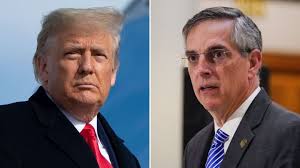 In the hour-long phone call, a recording of which was first obtained by The Washington Post, Trump pushed baseless conspiracy theories about voter fraud and told Raffensperger that Georgians are “angry” with the election results.

Raffensperger can be heard pushing back on Trump’s request, telling the president that the data he used to back up his claims are “wrong.”

“All I want to do is this: I just want to find 11,780 votes, which is one more than we have,” Trump told Raffensperger at another point in the conversation. “Because we won the state.”

In addition to its reporting, the Post also published a transcript and recording of the full one-hour call.

The Atlanta Journal-Constitution added later Sunday night that White House Chief of Staff Mark Meadows was also on the call and had urged Raffensperger to find a path forward “in the spirit of cooperation and compromise.”

“We don’t agree that you have won,” Raffensperger replied.

With less than three weeks left until the presidential inauguration, Trump still has not conceded the race to Biden and continues to falsely claim that the election was “rigged” against him. He has focused special attention on Georgia, which he won in 2016 but lost to Biden in November by fewer than 13,000 votes.

But top Georgia officials ― including Raffensperger and Georgia Gov. Brian Kemp, a Republican who was a vocal supporter of the president leading up to the election ― have said the state’s election process was free and fair and that the results are legitimate.

Neither the Justice Department nor election officials nationwide have found any evidence of widespread voter fraud or ballot-counting irregularities.

During the Saturday call, Trump told Raffensperger that he “should want to have an accurate election” and pointed out that the secretary of state is a Republican.

“We believe that we do have an accurate election,” Raffensperger said.

Trump later accused Raffensberger of committing a “criminal offense” by knowingly covering up a conspiracy against the president and warned the secretary of state that his actions would be “very costly in many ways.”

“I think you have to say that you’re going to reexamine it,” Trump said. “And you can reexamine it but reexamine it with people that want to find answers.”

The Post published audio clips of the call hours after Trump and Raffensberger exchanged barbs on Twitter. The president had claimed the Georgia secretary of state was “unwilling” to answer questions about so-called voter fraud during their conversation Saturday.

“Respectfully, President Trump: What you’re saying is not true,” Raffensberger tweeted in response. “The truth will come out.”

Respectfully, President Trump: What you’re saying is not true. The truth will come out https://t.co/ViYjTSeRcC

Raffensperger’s office announced last week that it had completed a ballot signature audit and found no evidence of fraud in the presidential election. Georgia had already conducted a hand recount and a subsequent machine recount at the request of the Trump campaign; both reviews affirmed Biden’s win in the state.

Judges across the country have thrown out lawsuits filed by the Trump campaign and Republicans to challenge the election results, including one appealed to the Georgia Supreme Court last month.

Raffensperger told Trump Saturday that he stands by the state’s election numbers and reminded the president that he can pursue challenges to those numbers in the court system if he deems it necessary.

“You would be respected, really respected if this thing could be straightened out before the election,” Trump told him. “You have a big election coming up on Tuesday.”

Some Republicans have expressed concern over Trump’s efforts to sow discord over the election process in Georgia, where two highly anticipated Senate runoff elections Tuesday will determine which party controls the upper chamber. The president’s attacks against the state’s election system could lead to low Republican voter turnout, according to some GOP operatives.

On Wednesday, several Republican senators and dozens of GOP House members are expected to object to the certification of the Electoral College votes during a joint congressional session.

At least 11 Republican senators, including Josh Hawley of Missouri and Ted Cruz of Texas, are part of that bloc of challengers. Senate Majority Leader Mitch McConnell (R-Ky.) has publicly urged GOP lawmakers not to object to the certification process.

On Sunday, a bipartisan group of 10 senators, including Republicans Susan Collins of Maine, Mitt Romney of Utah and  Bill Cassidy of Louisiana, called on their fellow members to formally certify Biden’s win.

“The 2020 election is over,” the group wrote in a joint statement. “All challenges through recounts and appeals have been exhausted. At this point, further attempts to cast doubt on the legitimacy of of the 2020 Presidential election are contrary to the clearly expressed will of the American people… It is time to move forward.”

DISCLAIMER: The Views, Comments, Opinions, Contributions and Statements made by Readers and Contributors on this platform do not necessarily represent the views or policy of Multimedia Group Limited.
Tags:
Georgia Secretary
Recorded phone call
Trump