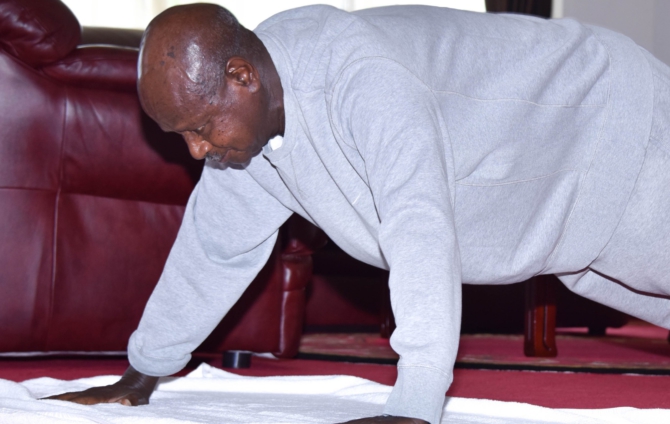 Uganda’s President Yoweri Museveni has released a video of himself working out in his office, to encourage citizens to exercise at home during the coronavirus pandemic.

As promised in his address yesterday, The President today started his day with indoor exercising. He encourages all Ugandans who have interest in exercising to do it indoors @KagutaMuseveni @OfwonoOpondo @DianaAtwine @FrankTumwebazek @UgandaMediaCent #SafeAtHome pic.twitter.com/tC8YdeKsgR

In the video, the president, barefoot, starts off by jogging around the room to warm up. He then gets down to do 21 press-ups in one go, as his press team counts along. He does 30 press ups in total.

On Wednesday, the president banned exercise in public as a control measure against coronavirus, after videos and photos of people working out in groups around the capital Kampala were posted on social media, despite the country being in a lockdown.

Just like I had earlier promised, I started my day with indoor exercising. pic.twitter.com/vsTT9Ho6To

This is not the first time the president has brought his own health into focus.

The 75-year old told the nation last year that he had lost 30kg (five stone) because he had started to focus on his health and fitness.

In January Mr Museveni walked 200 km (125 miles) through the Luweero triangle, where he had his bases as he fought the war that brought him to power.

Uganda has so far registered 53 cases of coronavirus.