UPNMG procures motorbikes for regions to cater for transportation needs 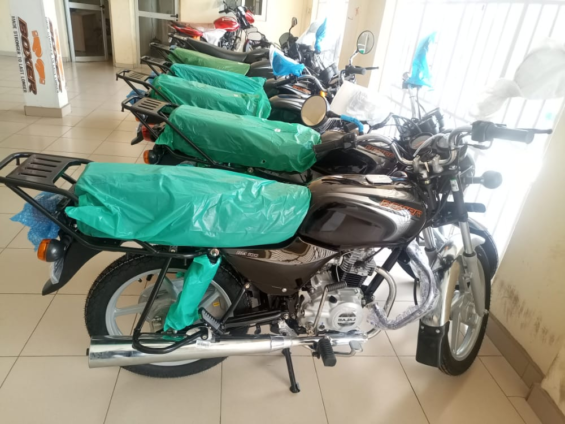 The Union of Professional Nurses and Midwives, Ghana (UPNMG), in response to the transportation needs of its various branches, has procured motorbikes for distribution to its administrative regions.

Three motorbikes were procured per region, which will bridge the gap between members of the union and their executives as it will enhance the ability of executives to respond timely to the calls of members as well as facilitate district tours.

This is in fulfillment of the decision made by the National Council during the union’s just-ended 2nd Quarter National Council meeting held in Sunyani to provide a means of transportation for the regional and district offices of the Union.

During the meeting, leadership identified that the lack of a means of transportation for its executives in the various regions was hampering the activities of the union.

Members were unable to easily access the executives of the union to make their grievances known to them.

Meanwhile, the UPNMG has intensified its call in demanding the Cost-of-Living Allowance (COLA) from the government.

In an interview, UPNMG PRO, John Agbenyeavu, indicated that the union will not back down from its demand for the COLA.

“This call is just to ensure that the government cushions nurses and midwives against the recent economic hardships that we are experiencing.

“Ghana has gone through some series of economic problems over the period. Inflation is currently at 27.6%, making livelihood for the Ghanaian nurse and midwife very difficult.”

Mr Agbenyeavu indicated that taxes in the country have been increased despite the harsh economic conditions, stressing the need for the introduction of the COLA.

“What else can we do to help government? We have been paying taxes. Currently, they [the government] introduced the e-levy. We are paying all these from the meagre salary we are collecting so how do you expect us to tighten our belts?” Mr. Agbenyeavu quizzed.

DISCLAIMER: The Views, Comments, Opinions, Contributions and Statements made by Readers and Contributors on this platform do not necessarily represent the views or policy of Multimedia Group Limited.
Tags:
Motorbikes
UPNMG