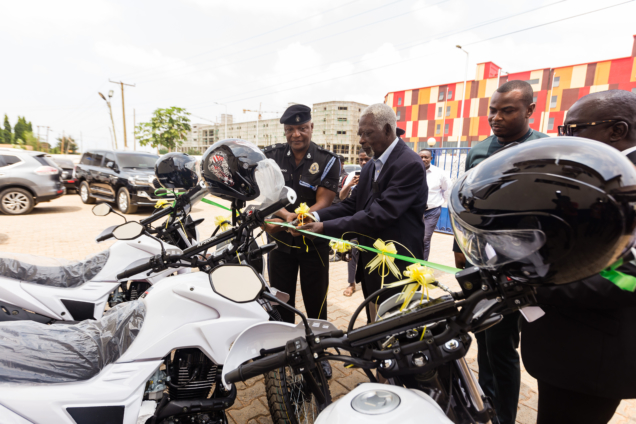 Edern Security Services, as part of its corporate social responsibility, has donated motorcycles to the Manet Police Station after a brief handing-over ceremony.

The support was also part of efforts to acknowledge and reward the hard work of two officers of the Manet Police station C/Inspr James Okai and D/CPL Bismark Agyei.

Chief Executive Officer of Edern Security, Emmanuel Quartey, who led the delegation to do the donation noted that the action was to aid the police in enforcing traffic regulations and executing their general police duties in the community.

“As a leader in the security sector, we understand and appreciate the role of the Police in ensuring the enforcement of the law and the safety of citizens.

“Our several collaborations with the Police Service to combat crime and to make our clients and citizens’ safe has moved us to engage in this initiative.

“We are confident that this addition to their motorcycles will boost their response time to crime in our communities and help in traffic management and other related duties.”

Supt. Elvis Sandongo, receiving the donation on behalf of the Manet Police station, expressed gratitude to Edern Security and assured that the motorcycles will be effectively utilised for the benefit of the people in the community.

“We are grateful to the management of Edern Security for this kind gesture. Indeed, as one of the leading companies in the security sector, Edern is in a better position to understand the work of the Police.

“We promise that we will make the best use of these motorcycles. We also wish Edern Security continued success in their business as they, in one way or the other, augment the work of the Police.”

He prayed for more of such donations and took the opportunity to reiterate the Ghana Police numbers as 191 or 18555.

Supt. Joshua Owusu on behalf of the IGP Dr. Dampare thanked the Staff of Edern and wished them well.