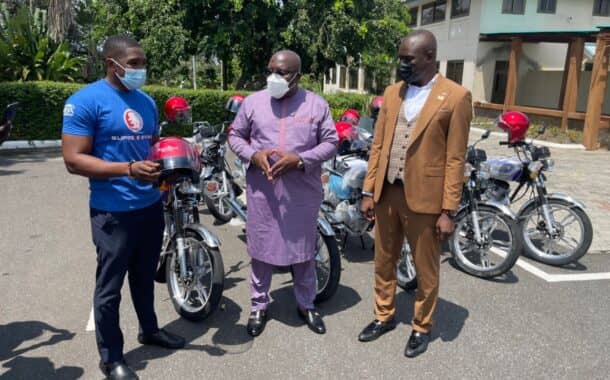 The Eastern Regional Minister, Seth Acheampong has urged Assembly members in the region to use their motorbikes in carrying out their official duties.

This, he said will help keep them in good shape as they carry out their business as Assembly members.

He made this remark when he handed over a total of 1,248 motorbikes to all 33 Municipal and District Chief Executives in Eastern Region for onward distribution to assembly members.

The motorbikes procured and supplied by JSA logistics GH Ltd are expected to enhance the work of Assembly members in their electoral areas to boost local governance.

Presenting the motorbikes, the minister called for regular maintenance to ensure longevity.

“These motorbikes, on behalf of his Excellency the president of the Republic, Nana Akufo-Addo to dean of presiding members within the 33 districts. This is to help facilitate their and help community growth, basically this is essence of central government through the local government minister, the Honourable Dan. Botwe,” he said

Receiving the motorbikes on behalf of the assembly members, the Dean of Presiding members, Michael Ahwireng thanked the government and promised to use the motorbikes for the intended purpose.

“We grateful for this big honour given to the assembly members. As the minister has said, we are also going to make good use of it to support the rural development,” he added

Assembly Members in the country have over the years been yearning for the distribution of motorbikes to enhance their work.

They decried the fact that motorbikes are mostly distributed to members few months to leave office.

Therefore urged that motorbikes be given the first year of their tenure in office.