US election 2020: How the world reacted to a Biden win - MyJoyOnline.com

US election 2020: How the world reacted to a Biden win 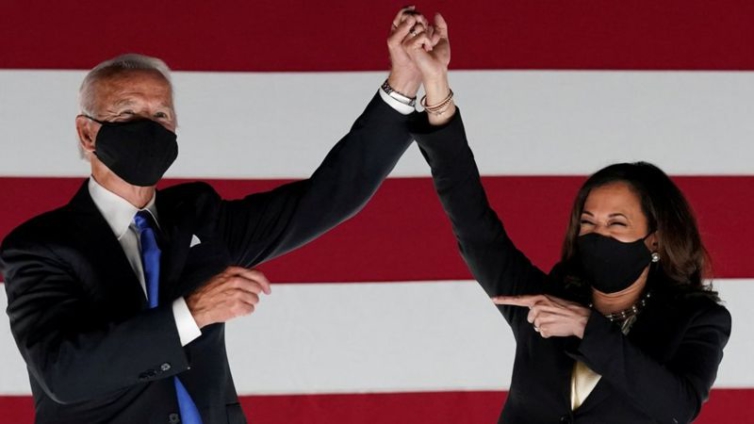 Joe Biden and Kamala Harris are projected to win Pennsylvania, sealing their bid for the White House

The results are finally in and the world is reacting to the victory of Joe Biden over Donald Trump in the US presidential election.

For days, people around the world have been glued to the White House race.

It is not just the US that the election of a new president affects – a new leader in the White House can transform the country’s foreign policy and its approach to its friends and foes alike. Here is how some of the world’s leaders have reacted, and where they stand with the US.

“Congratulations Joe Biden and Kamala Harris. Joe, we’ve had a long & warm personal relationship for nearly 40 years, and I know you as a great friend of Israel. I look forward to working with both of you to further strengthen the special alliance between the US and Israel.

“Thank you Donald Trump for the friendship you have shown the state of Israel and me personally, for recognizing Jerusalem and the Golan, for standing up to Iran, for the historic peace accords and for bringing the American-Israeli alliance to unprecedented heights.”

US policy in the Middle East shifted massively during Donald Trump’s presidency. He heightened tensions with Iran while recognising Jerusalem as Israel’s capital and helped establish ties between Israel and several Arab states.

Mr Biden’s suggestion he may rejoin the Iran nuclear deal will deeply concern Israeli policymakers. His likely objections to further Israeli settlement building in the occupied West Bank will also mark a shift from his predecessor.

“Congratulations to Joe Biden on his election… and to Kamala Harris on her historic achievement. The US is our most important ally and I look forward to working closely together on our shared priorities, from climate change to trade and security”

With Brexit looming, the UK will soon have a very different transatlantic partner in Joe Biden. The UK currently trades with the US on terms set by the EU, but this will change on 1 January 2021 when the transition period ends – and the US and UK are trying to negotiate a new post-Brexit trade deal.

Mr Biden – who often speaks of his Irish background – has said said he would not allow peace in Northern Ireland to become a “casualty of Brexit” if elected.

One of the most complicated issues as the UK leaves the EU is the frontier between Northern Ireland and the Republic of Ireland, which Mr Biden does not want to become a “hard border”. Currently there are no passport or customs controls on the border, and politicians on all sides fear a return to checks which existed during the decades of deadly civil unrest in Northern Ireland known as the Troubles.

“Congratulations Joe Biden on your spectacular victory! As the VP, your contribution to strengthening Indo-US relations was critical and invaluable. I look forward to working closely together once again…

“Heartiest congratulations Kamala Harris! Your success is path-breaking, and a matter of immense pride not just for your chittis [aunts], but also for all Indian-Americans. I am confident that the vibrant India-US ties will get even stronger with your support and leadership.”

Kamala Harris is the daughter of an Indian biologist, and there have been celebrations in India after her victory. But both she and Mr Biden have criticised the Hindu nationalist policies of Mr Modi’s government, something Donald Trump did not do during his time in office.

“America will have its first female Vice President in the person of Kamala Harris, and we are proud that she bears Jamaican heritage.

“Her ascension to this role is a monumental accomplishment for women all over the world and I salute her.”

While Ms Harris’s mother was Indian, her father is Jamaican by birth – sparking similar joy in the Caribbean country.

“Congratulations, Joe Biden and Kamala Harris. Our two countries are close friends, partners, and allies. We share a relationship that’s unique on the world stage. I’m really looking forward to working together and building on that with you both.”

Mr Trudeau and Mr Trump did not have the smoothest relationship. The Canadian liberal leader had noticeably different politics to his US counterpart, and will likely have a warmer partnership with Mr Biden who shares his views on climate change and international affairs.

Donald Trump is deeply unpopular in Germany. He and Chancellor Merkel clashed repeatedly on Nato funding, global diplomacy and even the coronavirus, in sharp contrast to Ms Merkel’s close relationship with his predecessor Barack Obama. Issues like military spending will remain but the US will likely renew its ties with Germany under Mr Biden.

“The Americans have chosen their President… We have a lot to do to overcome today’s challenges. Let’s work together!”

Mr Macron tried repeatedly to develop a good relationship with Mr Trump – including inviting him to the Bastille Day military parade in 2017 – but has more political similarities to Mr Biden, who like him favours international cooperation on climate change and diplomacy.

“Joe Biden has been a true friend of this nation throughout his life and I look forward to working with him in the years ahead. I also look forward to welcoming him back home when the circumstances allow!”

The president-elect can trace his roots back to County Mayo and County Louth. He has spoken many times about his pride in his heritage and frequently quotes the works of Irish poets.

“I congratulate Joe Biden on his election as the next US President & Kamala Harris as Vice President. I know Joe Biden as a strong supporter of our Alliance & look forward to working closely with him. A strong NATO is good for both North America & Europe”

“We don’t want to be suckers anymore,” Donald Trump once said of the Nato alliance. Throughout his presidency he demanded other members pay their fair share and even considered withdrawing the US. Joe Biden will support a return to defence co-operation, although US requests for greater contributions from allies will likely continue.

“Together, we have a planet to save from a Climate Emergency and a global economy to build back better from Covid-19.

“Now, more than ever, we need the USA at the helm of these multilateral efforts (and back in the Paris Agreement – ASAP!)”

The Fijian leader congratulated Mr Biden before the White House race had even been called.

The reason why is best explained by the reference to “a climate emergency” – Fiji is particularly vulnerable to climate change, and while Donald Trump pulled the US out of the Paris climate accords aimed at limiting global temperature rises, Joe Biden has vowed to bring the country back into the agreement on day one of his presidency.

“The situation in the US & what they themselves say about their elections is a spectacle! This is an example of the ugly face of liberal democracy in the US. Regardless of the outcome, one thing is absolutely clear, the definite political, civil, & moral decline of the US regime.”

Barack Obama’s administration negotiated a landmark nuclear deal with Iran in 2015 while Mr Biden served as his vice-president. Mr Trump unilaterally abandoned the agreement, but Mr Biden has said he is considering rejoining it.