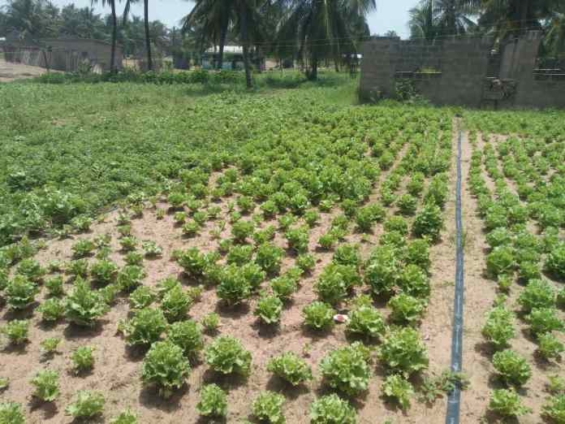 Many vegetable Farmers in the Ketu South Municipality of the Volta Region have started counting their losses due to Coronavirus.

The farmers who have invested thousands of cedis into carrot, lettuce, cabbage among other vegetables before the outbreak of the deadly virus, have seen their produce going waste.

They have left the vegetables on the farm to rot following a halt in patronage as commercial buyers, mainly from Togo and Accra, are unable to buy due to the restriction on movement.

Some of the farmers who spoke to gbcghanaonline.com, complained bitterly about the development.

“Buyers from far and near have stopped coming because consumers are now interested in staple food during the lockdown”.

When some selected farms at Adafienu, Hedranawo, Denu and Agbozume, many vegetables as mentioned above have truly gone bad on farms.

Efo Sammy, a young farmer said, “I’ve put all money into this and as you can see for yourself, I’ve lost everything because people are not interested.”

Another farmer called Mawusi also said, “all the money for this crop season is gone and I don’t know how to raise another money for the upcoming onion season”.

They, however, pleaded with the government and Ministry of Food and Agriculture to support them since the virus has destroyed their livelihood.

They again pleaded with the government to do something about border closure to revive their cross border business in no time.

DISCLAIMER: The Views, Comments, Opinions, Contributions and Statements made by Readers and Contributors on this platform do not necessarily represent the views or policy of Multimedia Group Limited.
Tags:
Agriculture
Coronavirus
Farming