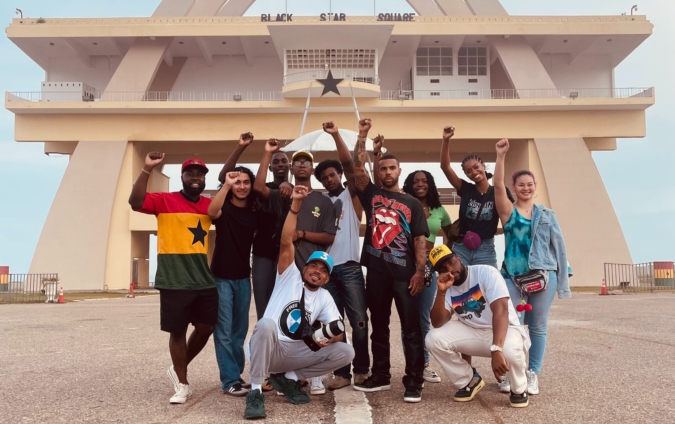 American rappers, Vic Mensa and Chance The Rapper have returned to Ghana after spending time in the country in January 2022.

The two artistes are in the country, this time, with about eight high school freshmen from Chicago in the US.

They are expected to stay in Ghana for about 10 days as part of an educational travel experience.

Taking to Instagram, Vic Mensa noted that “a year ago we had the idea to take a group of kids from Chicago to Ghana. There are some things about yourself that you can only understand by knowing where you come from.”

The musician added that “Our dream is to build bridges that cross the ocean of divide created by the transatlantic slave trade. Today we are one step closer to actualizing that dream.”

This comes after Chance The Rapper in January promised to return to the country with a “big group” in July.

Vic Mensa and Chance The Rapper in January toured some parts of the country during a short vacation they took.

Vic Mensa had been in Ghana in December 2021. He was later joined by colleague rapper Chance the Rapper in January 2022.

Ghana will celebrate it 65th year since it FOUGHT and gained its independence. I wanna go back in a big group in July. I promise you’ll feel at home 🇬🇭 JLIG (2022) shot by me pic.twitter.com/3NMpniktOG

The duo toured some parts of the country and met with many musicians including Darkovibes, Sarkodie, King Promise and M.anifest.

One of Chance The Rapper’s activities that got the country talking was his visit to a church on one Sunday (January 9) morning.

According to a post on Instagram, the church where he worshipped was built by his family years ago. He also revealed that his family has built a school in Jamestown.

Vic Mensa and Chance The Rapper later met with President Akufo-Addo at the Jubilee House during the latter part of their tour.

DISCLAIMER: The Views, Comments, Opinions, Contributions and Statements made by Readers and Contributors on this platform do not necessarily represent the views or policy of Multimedia Group Limited.
Tags:
Chance The Rapper
Vic Mensa