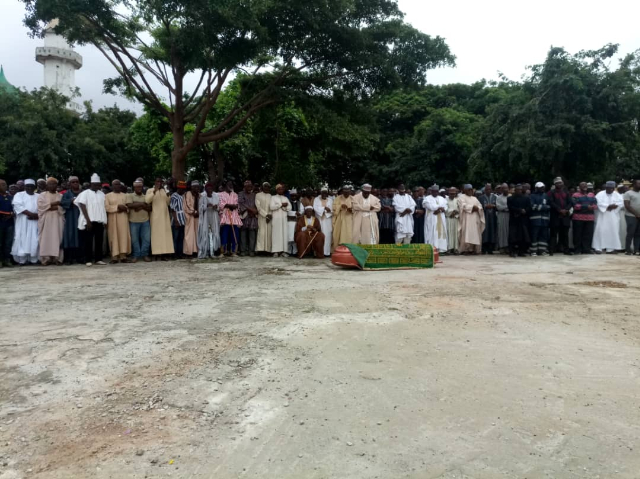 One of the seven persons killed by the Police in Manso Nkwanta on suspicion that they were armed robbers has been laid to rest, Sunday.

The burial took place after the family of Abdul-Hanan Bashir requested the corpse from the morgue when they were informed the autopsy report was ready.

The Muslim prayer for the 33-year-old was led by the regional Cheif Imam, Sheikh Abdul-Mumin Harun, and it took place at the Kumasi central mosque with heavy military presence.

Seven people were shot dead by the police near Anhwiakwanta on the Kumasi-Obuasi road last month on suspicion that they were armed robbers.

Related: 'They are not armed robbers!' – Zongo chief takes on police for shooting 7 indigenes

A statement by the acting Chief of the Zongo (or predominantly Hausa-speaking community) in Kumasi, Ahmed Rufai said the seven are well-known members of their community denying any claims they were robbers.

“We appeal to everyone to remain calm and refrain from any activity that will escalate the tension and grief that has again befallen our community,” it added.

But violence erupted in Asawase between the youth of the community and the police leading to the firing of tear gas to disperse a spontaneous crowd protesting the fatal shooting.

The youths from Zongo communities gathered to demonstrate their displeasure after a government delegation arrived the Ashanti regional capital, Kumasi, to deliberate on the charged matter of reckless police shooting at Manso Nkwanta.

The refrain at the burial grounds of Abdul-Hanan still remains the same as the family called for justice for the innocent souls.

According to the family, they cannot allow the body of their beloved to be waiting in the morgue once the committee set by government has taken relevant information from the body.