Video: Veteran actor needs GHc5000 or will lose his eyesight 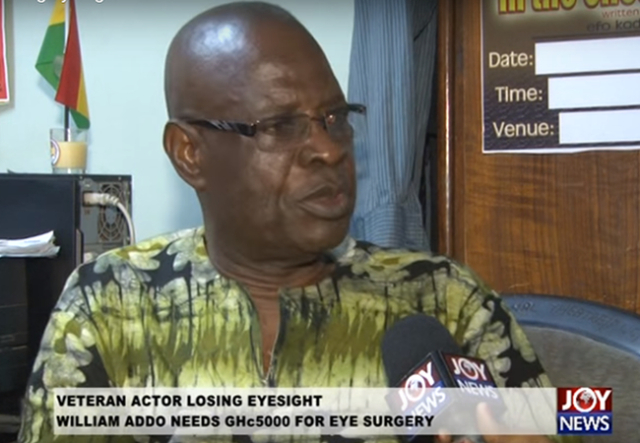 Veteran actor William Addo has a deadline of Thursday March 31 to raise GHc5000 to undergo a surgery to fix his eyesight.

The 66-year-old actor is suffering from glaucoma and cataract and is on the brink of losing his vision if he does not undergo the surgery. Hitz FM's Daybreak Hitz hosted by KMJ first broke the story of the veteran actor’s plight Wednesday morning.

Speaking in an interview with Joy News' MzGee, the actor said he realised he had problems with his eyes three years ago but did not know what exactly the problem was.

According to him, he never paid attention to it and did not seek medical attention until December 2015 when he was given prescription by doctors for eye drops that cost him GHc300 monthly.

The veteran actor says it’s been very difficult raising funds for the eye drops when his pension benefit is GHc200 every month.

William Addo is therefore pleading with the general public to come to aid to raise GHc5000 for the surgery at the Inter-Star Eye Clinic And Laser Center in Accra.