Vigilantism Bill to be passed under certificate of urgency - MyJoyOnline.com

Vigilantism Bill to be passed under certificate of urgency 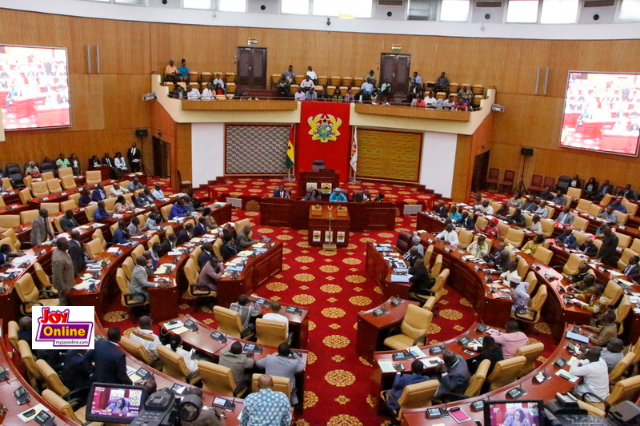 Parliament’s Committee on Constitution and Legal Affairs after considering the Vigilantism Bill has backed the Attorney-General’s request, for it to be passed under a certificate of urgency.

A Bill is deemed to be of an urgent nature when it need not be gazetted before being laid before Parliament. It can, however, be gazetted 24 hours or soon after it has been laid.

The Speaker, Prof Mike Ocquaye referred the Bill to the Committee for it to determine if indeed, it requires consideration under a certificate of urgency when the Attorney-General, Gloria Akuffo, laid it on Thursday, April 11.

Once passed into an Act, the Bill will see to the disbandment of political party vigilante groups and prohibit the formation of such.

After its deliberations, the Committee in a report said it has “duly considered the urgency or otherwise of the Bill and determines, by unanimous decision, that the Bill is of an urgent nature and may be taken through all the stages in one day in accordance with Article 106(13) of the Constitution and Order 119 of the Standing Orders of the House.

“…The Committee therefore by a unanimous decision, recommends to the House to adopt this Report and to pass the Vigilantism and Related Offences Bill 2019 in accordance with Article 106(13) of the 1992 Constitution,” the report added.

Article 106(13) states “Where it is determined by a committee of Parliament appointed for the purpose that a particular bill is of an urgent nature, the provisions of the preceding clauses of this article, other than clause (1) and paragraph (a) of clause (2) shall not apply, and accordingly, the President shall give his assent to the bill on its presentation for assent.”

The Bill may be passed into law when Parliament is recalled on April 29.

In an interview on Joy FM’s Top Story, Chairman of the Committee, Ben Abdallah Banda, said both sides on the committee have agreed on the need for the Bill to be passed under a certificate of urgency, stakeholder consultations must also be conducted.

He hopes that Parliament, before it resumes, will set aside a day for this to be done before the Bill is passed.

Ranking Member on the Committee, Inusah Fuseini said: “We are solidified in our view that broad stakeholder consultation and engagement is more likely to lead to greater public support and acceptability of this Bill because, we must deal with political vigilantism decisively.

“We will take the opportunity between now and when we are recalled to engage in broad stakeholder consultations and engagement and then fashion out a robust legal regime that will deal with this social phenomenon,” he added.

What does the Vigilantism and Related Offensive Bill seek to do?

The purpose of the Bill is to disband political party vigilante groups and forbid acts of such nature in the country, following the continuous violence that have characterised the country’s by-elections.

It also applies to persons who act as land guards and those who engage in other acts of vigilantism.

Also, persons who have witnessed the commission of an offence, acts with the sole aim of preventing the further commission of that offence or any other offence, are not targets of the Bill.

What happens if the law is breached?

A leader of a disbanded political party vigilante group who fails to comply with provisions of the Bill, commits an offence and is liable on summary conviction to a term of imprisonment of not less than five years and not more than 15 years.

Similarly, a person who violates the provisions will be liable on summary conviction to a term of imprisonment of not less than five years and not more than fifteen years.