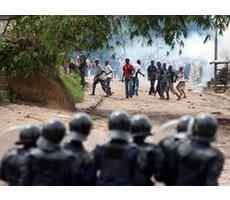 The West African Network for Peace-building says it has from January to June this year recorded seven deaths and nine injuries across the country, which it says were politically motivated.

It recorded 86 reported cases of violence out of which 20 incidents or 23 percent were politically-motivated and mentioned Ledzokuku, Gushegu, Odododiodoo, Bawku, Bimbilla, Aflao and Buipe as the areas that experienced the most violent cases within the period.

A GNA report quoting a news release issued in Tamale and signed by the National Network Coordinator, Justin Bayor says WANEP also recorded a total of 21 chieftaincy-related incidents with one death and four injuries out of an overall total of 86 cases per the period, representing 24% of the recorded incidents.

WANEP is appealing to the National Peace Council, the Regional and District security councils, to adopt peace building methods and approaches to resolving the numerous conflict situations under their jurisdictions rather than waiting for violence to erupt before they intervene with peacekeeping.